The Hindu Editorial Article of 17 August 2020 – Lapsing into Contempt. 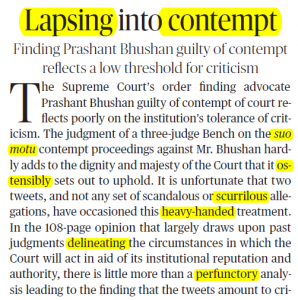 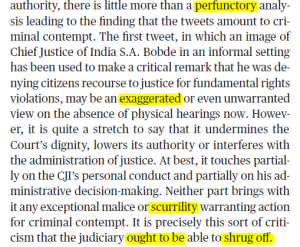 Lapse (verb) समाप्त हुए
Meaning:- (of a right, privilege, or agreement) become invalid because it is not used, claimed, or renewed; expire.
Synonyms:- blunder, breach, crime
Antonyms:-accuracy, advantage, behavior
Example:-It was not, however, before the lapse of several months that he succeeded.

Contempt (noun) निंदा
Meaning:- the feeling that a person or a thing is worthless or beneath consideration.
Synonyms:- antipathy, condescension, defiance
Antonyms:-approval, esteem, flattery
Example:-Where he thinks a contempt due, he pays it to the uttermost.

Suo motu (adjective)
Meaning:- Relating to an action taken by a court of its own accord, without any request by the parties involved.

Ostensibly (adverb) जाहिरा तौर पर
Meaning:- as appears or is stated to be true, though not necessarily so; apparently.
Synonyms: evidently, officially, seemingly
Antonyms:-improbably, obscurely, unlikely
Example:-Ostensibly they were a literary society; really they were diamond polishers.

Scurrilous (adjective) मिथ्या
Meaning:- making or spreading scandalous claims about someone with the intention of damaging their reputation.
Synonyms:- defamatory, indecent, insulting
Antonyms:-clean, decent
Example:-I stood aghast at this scurrilous address, the like of which I had never yet heard.

Heavy-handed ( adjective) तानाशाही
Meaning:- dealing with people or problems in a severe or harsh way : too strict or controlling
Synonyms:- coercive, cruel, harsh
Example: -A rough-featured, heavy-handed peasant’s son was this Peter.

Delineating (verb) चित्रित करना
Meaning:- describe or portray (something) precisely.
Synonyms:- define, depict, lay out
Antonyms:-confuse, distort
Example:-There was a particular dog in Washington which he was never tired of delineating.

Perfunctory (adjective) असावधान
Meaning:- (of an action) carried out without real interest, feeling, or effort.
Synonyms:- cursory, offhand, sketchy
Antonyms:-careful, complete
Example:-She began to fry her pork and apples, with a perfunctory attempt at conversation.

Exaggerated (adjective) अतिशयोक्तिपूर्ण
Meaning:- regarded or represented as larger, better, or worse than in reality.
Synonyms:- abstract, distorted, excessive
Antonyms:-actual, believable, calm
Example:-His great failing was that he exaggerated–no tale ever losing anything in his charge.

Ought to be (verb) होना चाहिए
Meaning:- used to indicate duty or correctness, typically when criticizing someone’s actions.

Shrug off (transitive verb) झटकना
Meaning:- to shake off
Synonyms:- brush aside, brush off 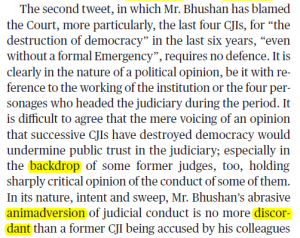 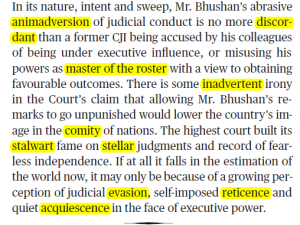 Backdrop (verb) पृष्ठभूमि
Meaning:- lie behind or beyond; serve as a background to.
Synonyms:- scenery, scrim
Example: -A low line of hills loomed beyond, painted of silver-gray against the backdrop of starry sky and the pallor of moon mists.

Discordant (adjective) प्रतिकूल
Meaning:- disagreeing or incongruous.
Synonyms:- cacophonous, clashing, dissonant
Antonyms:-similar, agreeable
Example:-For once, the music of her voice was lost in a discordant cry of detestation.

Master of the roster
Meaning:- the privilege of the Chief Justice to constitute Benches to hear cases.

Comity (noun) शिष्टाचार
Meaning:- courtesy and considerate behaviour towards others.
Synonyms:- altruism, compassion, generosity
Antonyms:-cruelty, harshness, meanness
Example:-Comity has a toll-gate at which you must pay, or you may not enter the land of Freedom

Stellar (adjective) तारकीय
Meaning:- featuring or having the quality of a star performer or performers.
Synonyms:- astronomical, cosmic, galactic
Example:-It came on bullet-fast, headed directly for the side of the Stellar.

Evasion (noun) टालना
Meaning:- the action of evading something.
Synonyms:- dodging, artifice, circumvention, cunning
Antonyms:-directness, frankness
Example:-There is not a subterfuge or an evasion or a small mean deceit in her soul.

Reticence (noun) अल्पभाषिता
Meaning:- the quality of being reticent; reserve.
Synonyms:- hesitation, shyness, closeness
Example:-In no duty towards others is there more need of reticence and self-restraint.