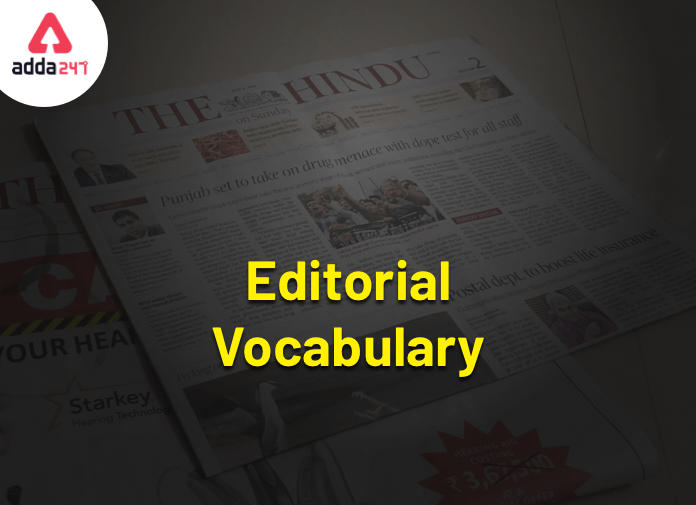 The Hindu Editorial Article of 22 June 2020- Lost in Clarification. 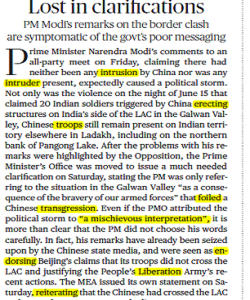 1.Intrusion (noun) –  The action of intruding.

2.Intruder (noun) –  A person who intrudes, especially into a building with criminal intent.

5.Foil (verb) –  Prevent (something considered wrong or undesirable) from succeeding.

6.Transgression (noun) – An act that goes against a law, rule, or code of conduct; an offence.

7. mischievous (adjective) – causing or showing a fondness for causing trouble in a playful way.

9.Liberation (noun) – The action of setting someone free from imprisonment, slavery, or oppression; release.

10. Reiterating (verb) – Say something again or a number of times, typically for emphasis or clarity. 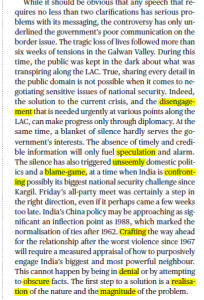 11.Disengagement (noun) –  The action or process of withdrawing from involvement in an activity, situation, or group.

12.Speculation (noun) – The forming of a theory or conjecture without firm evidence.

13.Unseemly (adjective) – (of behaviour or actions) not proper or appropriate.

14.Blame- Game (noun) –  A situation in which one party blames others for something bad or unfortunate rather than attempting to seek a solution.

15. Confronting (verb) –  come face to face with (someone) with hostile or argumentative intent.

16.Crafting (noun) – The activity or hobby of making decorative articles by hand.

17.Denial (noun) –  The action of denying something.

18.Obscure (adjective) – Not discovered or known about; uncertain.

19.Realization (noun) – An act of becoming fully aware of something as a fact.

20.Magnitude (noun) – The great size or extent of something.