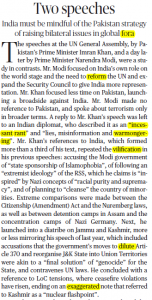 Fora (plural of forum) जनसभा
Meaning:- . the marketplace or public square of an ancient Roman city, the center of judicial and business affairs and place of assembly.
Example:- What made you want to look up fora?

Reform (verb) सुधार
Meaning:- make changes in (something, especially an institution or practice) in order to improve it.
Synonyms:- improve
Antonyms:-preserve, maintain
Example:- They want to reform campaign spending.

Rant (verb) शेख़ी
Meaning:- speak or shout at length in an angry, impassioned way.
Synonyms:-sound off, spout
Example:- She listened to his rant, peppered with language no kid Toby’s age should hear.

Warmongering (noun) युद्ध को उकसावा देना
Meaning:- encouragement or advocacy of aggression towards other countries or groups.
Example:- The same thing could be said of any other warmonger

Dilute (verb) पतला
Meaning:- make (a liquid) thinner or weaker by adding water or another solvent to it.
Synonyms:- weaken, thin
Antonyms:- concentrate
Example:- They are stained deep red in dilute solution of alkanin

Exaggerated (adjective) अतिरंजित
Meaning:- regarded or represented as larger, better, or worse than in reality.
Example:- The book exaggerates the difficulties he faced in starting his career. 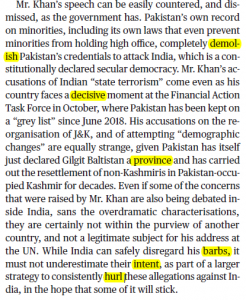 Decisive (adjective) निर्णयात्मक
Meaning:- settling an issue; producing a definite result.
Synonyms:- deciding, conclusive
Antonyms:- insignificant
Example:- You must be decisive and persistent to succeed in this competitive field.

Province (noun) प्रांत
Meaning:- a principal administrative division of a country or empire.
Synonyms:- territory, region
Example:- I belong to the province of Smolensk

Barbs (noun) अकड़
Meaning:- a sharp projection near the end of an arrow, fish hook, or similar object, which is angled away from the main point so as to make extraction difficult.
Synonyms:- spike, prong
Example:- Although called an Arabian, there is little doubt he was a Barb pure and simple

Intent (noun) इरादा
Meaning:- intention or purpose.
Synonyms:- aim, purpose
Example:- It wasn’t my intent to hide anything from you

Hurl (verb) उछालना
Meaning:- throw or impel (someone or something) with great force.
Synonyms:- throw, toss
Antonyms:- catch, hold
Example:- Someone hurled a rock through the window