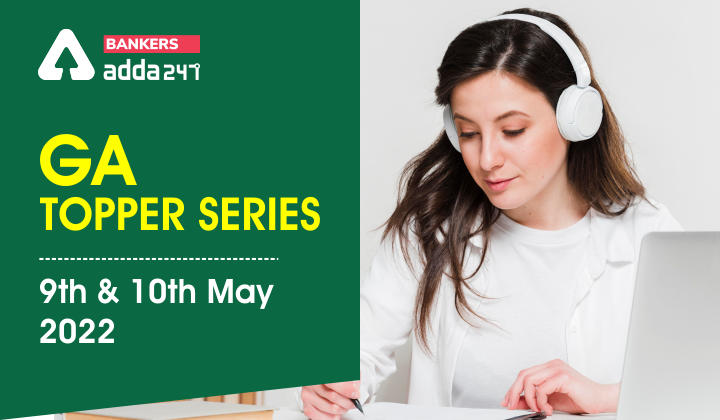 GA Topper Series: 9th & 10th May 2022: Hello Students, all those students who have cleared their prelims exams in the banking sector must be prepared with every topic in the General Awareness Section for the mains examinations. Bankersadda team has brought you up a new series in which we will come up with 10 questions with the correct answer and the detailed solution to the question.

Q1.Match the defense equipment with their use

Q2. Priyanka Mohite has accomplished one of the milestones. Choose the correct answer>

(a) First pilot to fly around the world

(b) First women pilot  to pass the pacific ocean

Q3. Choose the correct statement about the electoral map of Jammu and Kashmir

All the statements are correct. The report on delimitation came to public recently.

The Railway Protection Force (RPF) and the Association for Voluntary Action (AVA), also known as Bachpan Bachao Andolan, have signed a Memorandum of Understanding (MoU) for a trafficking-free India.

Q5. Choose which new appointments is/are correctly matched with their position and institution.

Q7. Which bank has launched an app for digital broking?

(b) State bank of India

Indian Bank, a public sector bank, has introduced its digital broking solution – ‘E- Broking’, as a strategic move toward comprehensive digitalization of its customer products.

Q8. States with their new initiatives are given. Choose which of the following is wrongly matched.

Q9. Thalassemia is a disease –

(a) an inherited blood disorder

(b) brittleness of bones

(b) Not Acquired Value

Net Asset Value or NAV is often heard as a familiar term when we talk about mutual funds. In a layman’s language, it is the price per share or unit of a mutual fund. As stocks have a share price, mutual funds have NAV.