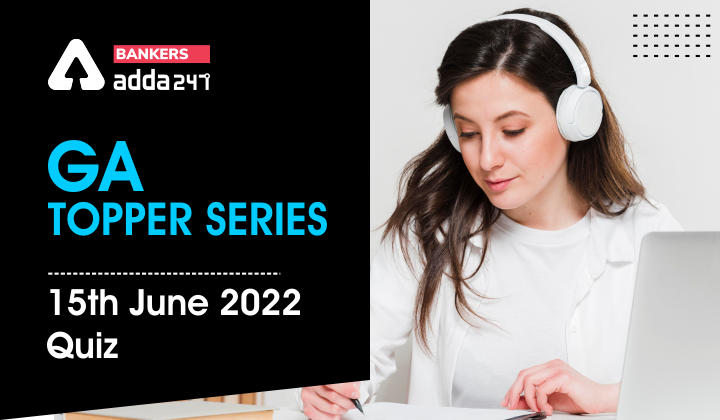 GA Topper Series: 15th June 2022 Quiz: Hello Students, all those students who have cleared their prelims exams in the banking sector must be prepared with every topic in the General Awareness Section for the mains examinations. Bankersadda team has brought you up a new series in which we will come up with 10 questions with the correct answer and the detailed solution to the question.

Q1. Consider the following statements about the UDAN scheme:

Q2. When BIMSTEC was founded?

Q4. Who became the MD of RBL bank?

Q7. United Nations(UN)’s World Day Against Child Labour is annually observed on 12th June. What is the theme of 2022?

Q8. Who has released the report titled “The role of social protection in the elimination of child labour: Evidence review and policy implications”?

Q9. As per June 2022 Ministry of Defence amended service rules, what is the eligible age for the post of Chief of Defence Staff (CDS)?

Q10. Which of the railway station became the first centralized AC railway terminal?

Launched in October 2016, it is a regional airport development programme of upgrading underserved air routes. The first UDAN flight was launched by Prime Minister(PM) Narendra Modi on 27th April 2017 from Jubbarhatti Airport, Shimla to Delhi

It is a key component of the National Civil Aviation Policy, 2016. Under the scheme, the fare for 500 km is ∼Rs 2,500. Currently, over 415 UDAN routes connect 66 underserved/unserved airports, including heliports and water aerodromes. As of March 21, 2022, the total collection in the Regional Air Connectivity Fund Trust was Rs 2,459 crore, and viability gap funding disbursed to the selected airline operator under UDAN was Rs 1,784 crore.

The Reserve Bank of India has approved the appointment of R Subramaniakumar as Managing Director (MD) and Chief Executive Officer (CEO) of RBL Bank for a period of 3 years with effect from the date of his taking charge, under Section 35B of the Banking Regulation Act 1949

Tencent, a Chinese technology conglomerate, has bought a stake in Walmart-owned Flipkart from its cofounder Binny Bansal for USD 264 million (about Rs 2,060 crore) through its European subsidiary Tencent Cloud Europe BV

Sachin and Binny Bansal are the founders

The joint report of ILO and United Nations Children’s Fund (UNICEF) titled “The role of social protection in the elimination of child labour: Evidence review and policy implications” was released at the 5th Global Conference on the Elimination of Child Labour hosted by South Africa.

The Ministry of Defence has amended the service rule of the Army, Air Force and Navy, inserting the clause allowing the retired Chief and their second in command in the armed forces, not older than 62, eligible for the post of Chief of Defence Staff (CDS), the topmost military assignment.

The government may extend the service of the CDS for such a period as it may deem necessary subject to a maximum age of 65 years. The clause has been inserted after sub-rule (4) of rule 16A of the Army Rules, 1954.

This will enable the retired 3-star generals from Army, Navy and Air force to become eligible for the post of CDS