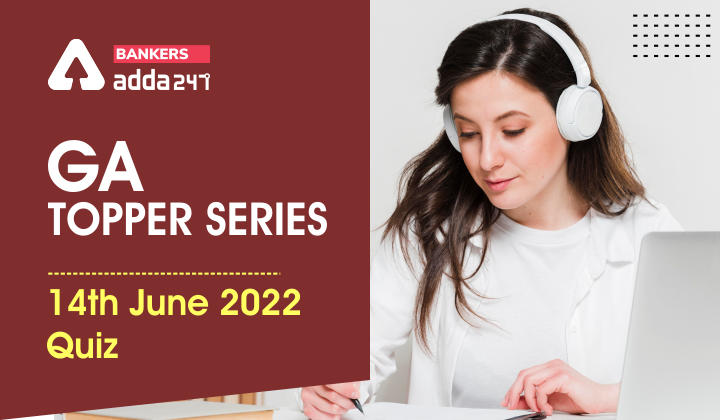 GA Topper Series: 14th June 2022 Quiz: Hello Students, all those students who have cleared their prelims exams in the banking sector must be prepared with every topic in the General Awareness Section for the mains examinations. Bankersadda team has brought you up a new series in which we will come up with 10 questions with the correct answer and the detailed solution to the question.

Q1. Kristalina Georgieva was appointed IMF’s Asia and Pacific Department director. Who is the person?

Q2. What is the name of the official mascot of the 44th International Chess Federation and where it is going to hold?

Q3. What is the amount of Accidental insurance cover extended to group personnel by Jammu and Kashmir Bank?

Q4. What is the name of the covid vaccine for animals made in India?

Q5. Which state launched the Yantra Seva scheme and for what purpose?

Q6.N J Ojha has been appointed as ombudsman for which of the schemes?

Q7. Which act guarantees the right to work?

Q8. Amandeep Singh gill was appointed as envoy on technology in which of the organization?

Q9. In the world investment report, India is on which rank for FDI?

Q10. Which of the statements are correct regarding the world investment report?

Which of the statements are incorrect?

He will succeed Changyong Rhee who relinquished his role as APD Director immediately, following his nomination as a candidate for Governor of the Central Bank of Korea.

N J Ojha has been appointed as ombudsman for a two-year term under the Mahatma Gandhi National Rural Employment Guarantee Scheme. Ojha has the power to investigate allegations by MGNREGA staff, consider them, and award awards within 30 days of receipt of the complaint.

According to the United Nations Conference on Trade and Development (UNCTAD), India jumped one position to 7th among the top recipients of foreign direct investment (FDI) in the last calendar year (2021) despite FDI inflows into the country declining. In its latest World Investment Report, UNCTAD said FDI inflows into India declined to $45 billion in 2021 from $64 billion in the preceding year. Outward FDI from India rose 43 percent to $15.5 billion in 2021.

While the United States ($367 billion) remained the top recipient of FDI, China ($181 billion) and Hong Kong ($141 billion) also retained second and third positions, respectively. Among the top 10 host economies for FDI, only India saw a decline in its FDI inflows.