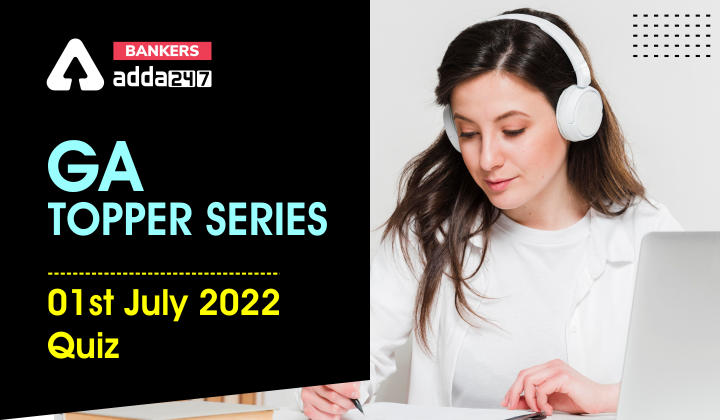 GA Topper Series: 1st July 2022 Quiz: Hello Students, all those students who have cleared their prelims exams in the banking sector must be prepared with every topic in the General Awareness Section for the mains examinations. Bankersadda team has brought you up a new series in which we will come up with 10 questions with the correct answer and the detailed solution to the question.

Q1. National Investigation Agency is established in which year?

(a) Ministry of Home Affairs

(b) Ministry of Defence

(d) Ministry of Law and Justice

Q3. Ashadi Beej is celebrated in which state?

Q6. ‘Capstone’ is the satellite of which organization?

Q7. What is the full form of PACS?

Q8. Computerization of Primary Agricultural Credit Societies (PACS) proposes how many PACS to be computerized in 5 years?

(a) Transforming Our Cities for a Better Urban Future

(b) Transforming Our Cities

The National Investigation Agency (NIA) is the primary counter-terrorist task force in India. The agency is empowered to deal with the investigation of terror-related crimes across states without special permission from the states under a written proclamation from the Ministry of Home Affairs.

Ashadi Beej is a celebration of rain. During Ashadhi-beej, farmers check the moisture in the atmosphere to help predict which crop would do best in the coming monsoon. It is celebrated in Gujarat.

The objective is to increase the efficiency of PACS, and bring transparency and accountability to their operations This project proposes the computerization of about 63,000 functional PACS over a period of 5 years with the Government of India’s share of ₹1,528 crore

The theme of World Urban Forum11, Transforming Our Cities for a Better Urban Future, will highlight a state of informed preparedness that provides us with the opportunity to anticipate change, correct the course of action if necessary, and become more knowledgeable on the different possibilities that the future of cities offers. It also illuminates the ways that policy, strategies, and actions can promote desirable futures.