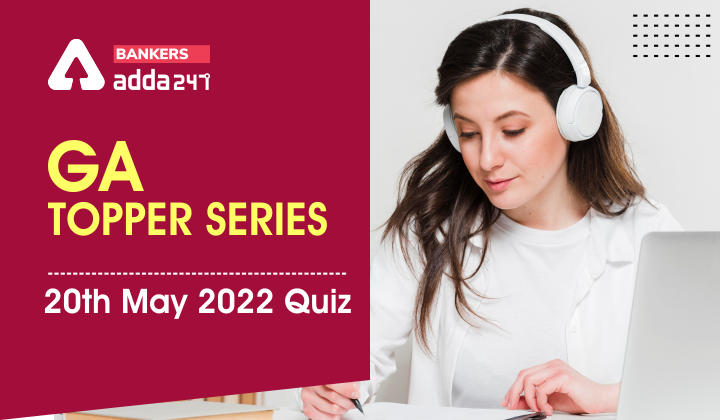 GA Topper Series: 20th May 2022 Quiz: Hello Students, all those students who have cleared their prelims exams in the banking sector must be prepared with every topic in the General Awareness Section for the mains examinations. Bankersadda team has brought you up a new series in which we will come up with 10 questions with the correct answer and the detailed solution to the question.

Q1. Who has been appointed as the chairman of BSELtd?

Q3. Who has received an honorary Commander of the Order of the British Empire (CBE)?

Q4. Who is the author of “A place called home” book?

Q5. Who has been appointed as MD and CEO of Bharti airtel?

Q6. Which article of the constitution is related to the structure of the Delhi Government?

Q7. Which pair has Giants put up the best first-wicket stand in the Indian Premier League’s history?

Q8. Under what article Rajiv Gandhi Assassinator was released recently. What is his name?

Q9. For what purpose DISHA satellite is built by ISRO?

(a) for studying the earth’s upper atmosphere

(b) for studying venus

(c) for studying the sun’s atmosphere

Chairman of the Piramal Group, Ajay Piramal has received an honorary Commander of the Order of the British Empire (CBE) by Her Majesty The Queen. He received the award for services to the UK-India trade relationship as India Co-Chair of the UK-India CEO Forum.

Preeti Shenoy is set to publish a new novel titled “A Place Called Home”, a story set in a coffee estate in Sakleshpur, Karnataka.

Bharti Airtel board has reappointed Gopal Vittal as Managing Director & CEO for a further period of five years ending on January 31, 2028. The reappointment came on a day the telco posted a consolidated net profit at Rs 2,007.8 crore

Quinton de Kock and KL Rahul of the Lucknow Super Giants put up the best first-wicket stand in the Indian Premier League’s history. This is the first time in the IPL where a team batted first and finished 20 overs with an unbroken opening partnership.

The Supreme Court used Article 142 of the Constitution to grant AG Perarivalan, a convict in the assassination of former Prime Minister Rajiv Gandhi, extraordinary powers to “do complete justice in any cause or matter pending before it.” Perarivalan was released free by a bench of justices led by L.N. Rao and B.R. Gavai, who took into account his lengthy incarceration.

All other convicts were given a death sentence.

The Indian Space Research Organisation (ISRO) is all set to build an identical pair of satellites/twin satellites namely ‘DISHA (Disturbed and quiet time Ionosphere-thermosphere System at High Altitudes)’ in L and H variants, for studying the earth’s upper atmosphere. The twin Aeronomy mission, “DISHA-H&L mission” was conceptualized by ISRO.

World AIDS Vaccine Day also known as HIV Vaccine Awareness Day(HVAD) is annually observed across the globe on the 18th of May to create awareness and provide information about Acquired Immuno Deficiency Syndrome (AIDS), a chronic, potentially life-threatening condition caused by the Human Immunodeficiency Virus (HIV) and its immunization.