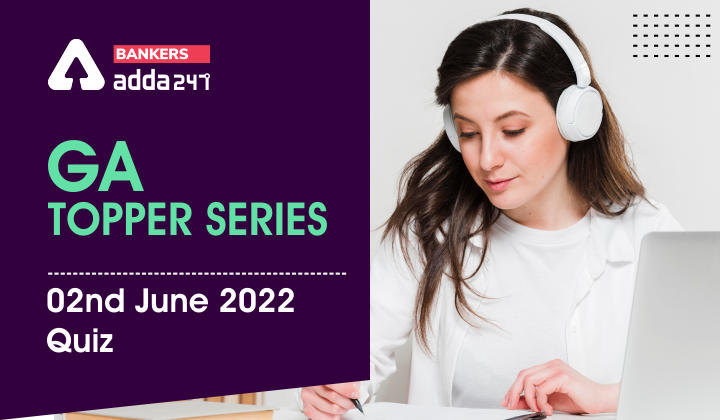 GA Topper Series: 2nd June 2022 Quiz: Hello Students, all those students who have cleared their prelims exams in the banking sector must be prepared with every topic in the General Awareness Section for the mains examinations. Bankersadda team has brought you up a new series in which we will come up with 10 questions with the correct answer and the detailed solution to the question.

Q1. Who has been appointed to the monetary policy committee of England?

Q2. Which of the Arab countries is the first to sign the free trade agreement with Israel?

Q4. What is the theme of world milk day?

(a) Happy and healthy

Q5. Which of the supercomputers are correctly matched with their organization?

Q6. Which state, does the Department of Posts delivers mail using a drone for the first time?

Q7. Bandhan Express and Maitree Express, which were seen in the news, run between India and which country?

Q8. Which of the following statements are correct regarding the PM CARES for children scheme?

Q9.  Which state has been chosen for the WHO world No Tobacco day award 2022?

Q10. As per the ‘Road accidents in India – 2020’ report released recently, which state/UT recorded the highest accident severity in 2020?

Leading UK-based academic, Dr. Swati Dhingra has been named as the first Indian-origin woman to be appointed as an external member of the Bank of England’s interest rate-setting committee- monetary policy committee.

The NEP 2020 is the first education policy of the 21st century and replaces the thirty-four-year-old National Policy on Education (NPE), 1986. Built on the foundational pillars of Access, Equity, Quality, Affordability, and Accountability, this policy is aligned with the 2030 Agenda for Sustainable Development

The two earlier education policies were brought in 1968 and 1986.

The Food and Agriculture Organization adopted June 1 as World Milk Day. The day is marked to recognize milk as global food and to celebrate the dairy industry. The day has been observed on June 1 each year since 2001.

The theme of World Milk Day 2022 is to bring attention to the climate change crisis and how the dairy sector can reduce its impact on the planet. The aim is to achieve ‘Dairy Net Zero’ by reducing greenhouse gas emissions over the next 30 years and improving waste management in order to make the dairy sector sustainable.

Param Ananta is a state-of-the-art supercomputer at IIT Gandhinagar dedicated to the nation under the National Supercomputing Mission (NSM).

Gujarat
The Department of Posts delivered mail using a drone as part of a pilot project in Gujarat’s Kutch district, for the first time. The project covered a distance of 46 km in 25 minutes, from Bhuj taluk to Bhachau taluk of Kutch district by the postal department under the guidance of the Union Ministry of Communications. The pilot project studied the cost of delivery by drones and the geographical location between the two centres.

Bandhan Express, which runs between India and Bangladesh, recently resumed service after two years, which was earlier stopped due to the Covid pandemic.
Maitree Express also resumed services after a long gap of more than two years. Bandhan Express between Kolkata and Khulna runs two days a week, and Maitree Express connects Kolkata with Dhaka running five days a week.

About the PM CARES scheme:

PM CARES for Children Scheme was launched by the Prime Minister on 29 May 2021.

The aim was to support children who have lost both their parents or legal guardian or adoptive parents or surviving parents to the Covid-19 pandemic, during the period from 11 March 2020 to 28 February 2022.

The objective of the PM CARES scheme:

The objective of the Scheme is to ensure comprehensive care and protection of children in a sustained manner by providing them boarding and lodging, empowering them through education and scholarships, and equipping them for self-sufficient existence with the financial support of Rs. 10 lakhs on attaining 23 years of age and ensuring their wellbeing through health insurance.

The portal is a single-window system that facilitates the approval process and all other assistance for children.

World Health Organization (WHO) has chosen Jharkhand for the World No Tobacco Day (WNTD) Award-2022, in recognition of the state’s efforts to reduce tobacco usage.