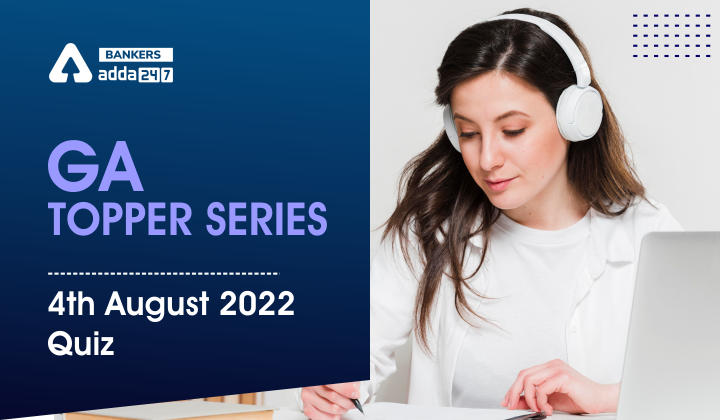 GA Topper Series: 4th August 2022: Hello Students, General Awareness is an essential part of all government exams. It’s better to prepare this section daily and revise the same using the factsheet provided. Bankersadda team has brought you up a new series in which we will come up with 10 questions and answers, other options of the question have related news to them. So don’t miss reading the solutions.

Q1. ‘Revamped Distribution Sector Scheme’ which was recently launched by Prime Minister, is implemented by which Union Ministry?

(a) Ministry of Petroleum

(b) Ministry of Commerce

Q2. Logistics Data Bank (LDB) Project, which was seen in the news, is associated with which Ministry?

(a) Ministry of Electronics , Information and Technology

(b) Ministry of communication

(c) Ministry of Science and technology

Q3. Druk Wangyal Khang Zhang Chortens, is a memorial located in which country?

Q4. Martand Sun Temple is situated in which state?

(b) Jammu and Kashmir

Q5. As per the Election Commission, youngsters attaining how many years can apply in advance for electoral cards?

Q6. For which of the following crops , Minimum Support Price is not declared?

Q8. Who has been appointed as the 9th president of Albania?

Q9. Match the new Ramsar sites with their states

Q10. What are the three braod parameters of RBI’s composite financial inclusion index?

Indian Army Chief General Manoj Pandey, who is on a visit to Bhutan, held a bilateral discussion with the fourth King of the country Jigme Singye Wangchuk.
Army Chief concludes his visit by paying homage at the Druk Wangyal Khang Zhang Chortens at Dochula. It was established in honour of the fallen heroes of the Royal Bhutan Army who made supreme sacrifice in operations against insurgents.

Two months after the Archaeological Survey of India (ASI) red-flagged a religious ceremony at the Martand Sun Temple in Jammu and Kashmir’s Anantnag — wherein Lieutenant-Governor Manoj Sinha also participated — a group of Hindu pilgrims entered its premises and held an hour-long prayer session in an inner section.

As per the Election Commission of India (ECI), those above the age of 17 can now apply in advance for enrolment in the voters’ list.
The electoral roll will be updated every quarter. Earlier, afrer the recommendations of ECI, the Law Ministry amended the Representation of the People Act to provide for four qualifying dates: January 1, April 1, July 1 and October 1 as the eligibility for youngsters to register in electoral rolls.

President is part of parliament. After signing the bill , it becomes an act.

Parliament has passed the National Anti-Doping Bill 2021 with the Rajya Sabha approving it unanimously. The Lok Sabah has already passed the bill. The Bill prohibits athletes, athlete support personnel and other persons from engaging in doping. Under the new legislation, violation of anti-doping rules may result in disqualification of results including forfeiture of medals, points and prizes, ineligibility to participate in a competition or event for a prescribed period, and financial sanctions.

The ninth President of Albania, Bajram Begaj, a retired military commander and politician, took the oath of office here in Parliament.

Five new wetlands of International importance have been designated in India. With this, the total number of Ramsar sites in the country have been increased from 49 to 54 Ramsar sites.

The five newly designated wetlands are:

The Reserve Bank of India’s composite financial inclusion index (FI-Index) capturing the extent of financial inclusion across the country rose to 56.4 in March 2022, showing growth across parameters. RBI now publishes the index annually in July every year.

it comprises three broad parameters — access with 35% weightage, usage with 45% weightage and quality with 20% weightage. It incorporates details of banking, investments, insurance, postal as well as the pension sector.