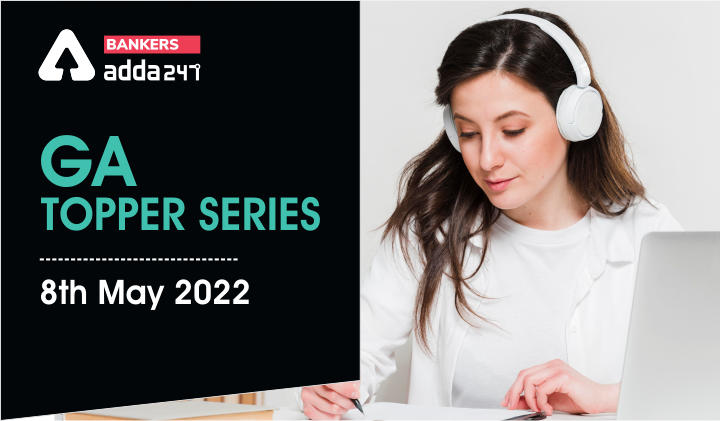 GA Topper Series: 8th May 2022: Hello Students, all those students who have cleared their prelims exams in the banking sector must be prepared with every topic in the General Awareness Section for the mains examinations. Bankersadda team has brought you up a new series in which we will come up with 10 questions with the correct answer and the detailed solution to the question.

(b) National Institute of Mental Health and Neuro-Sciences

International Institute for Population Sciences (IIPS) in Mumbai as the nodal agency for all rounds of NFHS. Technical assistance for the NFHS was provided mainly by ICF (United States of America) through the Demographic and Health Surveys (DHS) Program, which is funded by United States Agency for International Development (USAID). Report released at the ‘Swasthya Chintan Shivir’ held in Ekta Nagar(previously known as Kevadia), Gujarat.

Q2. Under one district one product under Pradhan Mantri Formalisation of Micro food processing Enterprises (PMFME) Scheme three brands were launched recently. Match the following brands with their state-

Q3 Which country gave Guard of Honour to prime minister of India?

Q4. Which country has withdrawn from P-75I project of India and P-75I is related to what?

France’s Naval Group withdraws from India’s P-75I submarine project P-75 India (P-75I) project under which six conventional submarines are to be built in India for the Indian Navy. The bone of contention was requirements for air-independent propulsion (AIP) system.

Q5. Which company secure Solar EPC project of what value?

Q6. Who is honoured with Woman Transforming India at IACC and she belongs to which company?

Q8 Padma shri Tarundeep rai and Ridhi are related to which sport?

Q9. Which book is edited by Airmarshal Jagjeet singh ?

Q10. Which country is doing largest film restoration project with how much allotted amount?

Information and Broadcasting Minister, Anurag Thakur said that an amount of Rs 363 crore has been allotted for the world’s largest film restoration project. The process of restoring over 5900 short films, documentaries and features is underway. He said this exercise carried out by the National Film Archive of India.