Q2.How many persons sit between A and D when counted anticlockwise direction from D ?
(a) Three
(b) Four
(c) Five
(d)Two
(e) None of these

Q6. If the given words are arranged in the order as they appear in a dictionary from left to right, which of the following word will be the fifth from the left end?
(a) MINTS
(b) RAGSE
(c) CULTS
(d) NIGAS
(e) PEMTO

Q7. If the letters of the given words are arranged in alphabetical order then within the word how many meaningful words will be formed?
(a) Four
(b) Three
(c) Two
(d) One
(e) None

Q8. How many letters are there between the first Letter of third word from left end and Last Letter of the second word from right end(According to the alphabetical order)?
(a) Eight
(b) Nine
(c) Ten
(d) Fifteen
(e) Sixteen

Q9. How many vowels are there in between the first letter of first word from left and last letter of last word from right (According to the alphabetical order)?
(a) Two
(b) Three
(c) None
(d) Five
(e) None of these 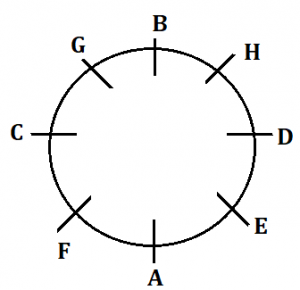