Directions (1-5): A word and number arrangement machine when given an input line of words and numbers rearranges them following a particular rule in each step. The following is an illustration of input and rearrangement.

Directions (6-10): Study the following information carefully and answer the questions given below:
Eight persons Z, P, O, M, L, K, J and I lives on different flats in the same building having three floor. Ground floor is number 1 and top floor is number third but not necessarily in the same order. There are three flats on each floor- flat-1, flat-2 and flat-3 from west to east such that flat-1 of third floor is exactly above flat-1 of second floor which is just above flat-1 of first floor and other flats are placed in the same way. One of the flat is vacant.
Z lives in an even numbered flat. K lives on one of the floors above M. Three persons live on the floor in which K lives. Only two persons lives on the floor on which Z lives. L lives just above J who lives on the floor in which no flat is vacant. M lives just below the vacant flat. O lives on the flat which to the west of I. There is no flat to the east of K. The flat which is just below O is not vacant.

Solutions (1-5):
Sol.
In this new pattern input output question only one word and one number is arranged in each step. Let us understand the logic behind it- In each step the words and numbers are arranged from the left end.
For words- The word which comes last according to alphabetical series is arranged first and the last letter of that word is omitted and further first and fourth letter are interchanged and second and third letter are interchanged.
For numbers- Numbers start arranging as the highest number+1 is arranged in 1st step then second highest+1 number in second step and so on from left end after each newly arranged word. 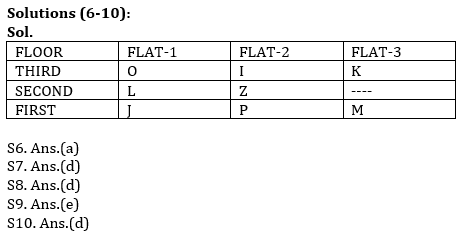