Direction (1-5): Study the following information and answer the given questions:
Nine persons are sitting in a row either facing north or south direction. They like different colors green, blue and red. They are sitting adjacent to each other in a group of three each likes different color from each other. No two persons who like same color sit together. Not more than two persons facing same direction sit together. D is one of the persons and does not like same color as H. More than three persons sit between H and I. F sits exactly in middle of the row. H is 3rd to the left of F and likes green. One of the neighbor of H is A, who likes red. G is 3rd to the left of C and likes blue. B likes red. The number of person sitting between E and B is same as between B and I. All the persons who like blue face north except the one sitting 2nd to the right of F. H and I face opposite direction. One person sits between H and C, who faces south. All the persons who like red face north. I does not like blue or red. E likes Blue.

Q4. Which of the following statement is not true regarding E?
(a) E likes Blue
(b) Both the neighbor of E like green
(c) Two persons sit between E and B
(d) D sits next to E
(e) None of these

Direction (6-8): Study the following information and answer the given question.
T is the sister of D. D is married to P. P is the son of M.T is the mother of J. Y is the father of U.Y has only one son and only one daughter. U is the daughter of T. Q is the son of D.

Directions (9-13): Study the following information carefully to answer the given questions.
Eight persons P, Q, R, S, T, U, V and W sitting around a circular table with equal distance between each other but not necessarily in the same order. Some of them are facing the centre while some are facing outside (i.e. away from the centre).
They all belong to four different places viz. East Coast, West Coast, North Wellington and South Africa, and two persons belong to each place.

Directions (14-15): In each of the questions given below three statements are followed by some conclusions. You have to take the given statements to be true even if they seem to be at variance from commonly known facts. Read all the conclusions and then decide which of the given conclusions logically does not follows from the given statements disregarding commonly known facts.
Q14. Statements:
Only a few floor are circle
Only a few circle are row.
All row are mix.
Conclusions:
I. Some floor can be mix.
II. All mix can be circle.
III. Some mix is floor.
(a)Only I and II
(b)Only II and III
(c)Only III
(d)All follow
(e)None of these 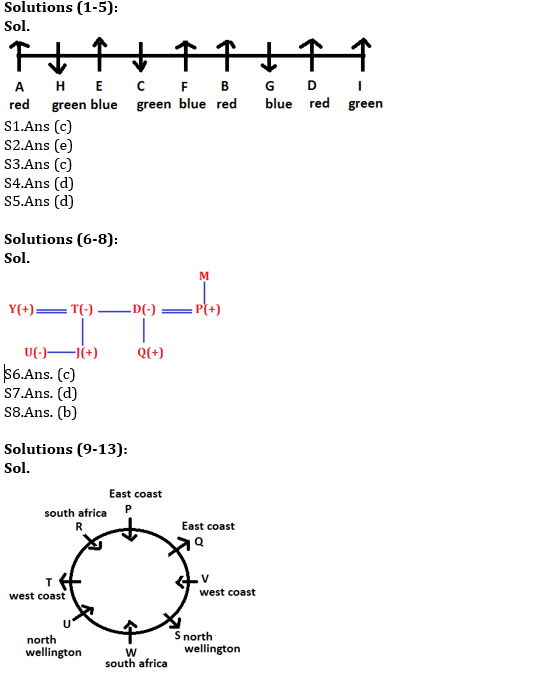 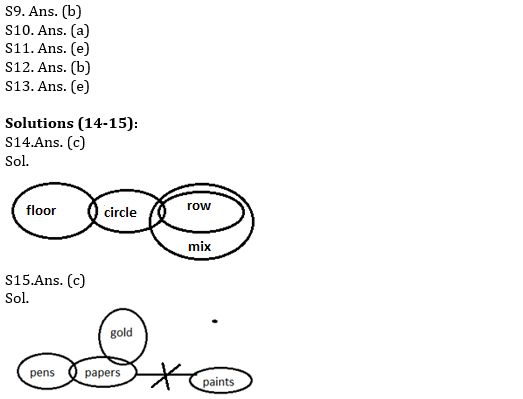