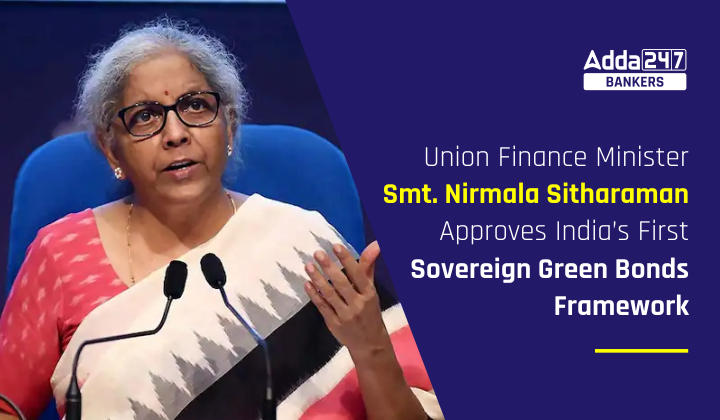 Union Finance Minister Smt. Nirmala Sitharaman approves India’s First Sovereign Green Bonds Framework: The final framework for India’s sovereign green bonds has been approved by Union Minister for Finance and Corporate Affairs Nirmala Sitharaman. With this approval, India will be even more committed to meeting the goals outlined in its Nationally Determined Contribution (NDC) under the Paris Agreement. It will also make it easier to attract both domestic and foreign investment in green projects that qualify. The money raised from the sale of these bonds will be used to fund government initiatives that lower the economy’s carbon footprint.

What is Sovereign Green Bonds Framework?

What are Green Bonds?

Environmentally friendly and climate-friendly projects can be funded with the help of financial instruments called “green bonds.” In comparison to regular bonds, green bonds have a lower cost of capital due to their indication of environmental sustainability, but they also require greater credibility and commitments during the bond-raising process. The European Investment Bank, the lending arm of the EU, issued the first green bond in 2007. They focus on clean transportation, clean water, sustainable water management, sustainable agriculture, fisheries, and forestry, as well as energy efficiency and pollution prevention.