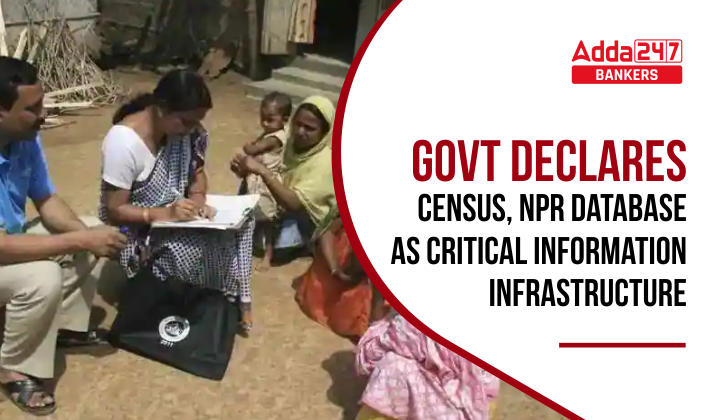 Govt declares census, NPR database as critical information infrastructure: Certain databases connected to the Census and the National Population Register (NPR) have been designated as critical information infrastructure by the government. The decision was made after using the authority granted to it by the Information Technology Act of 2000, according to a notification from the Union home ministry (Amended 2008).

What is Critical Information Infrastructure?

The Critical Information Infrastructure is a computer resource that, if incapacitated or destroyed, would have a severe negative impact on the economy, public health, or safety, according to the Information Technology Act of 2000. In order to protect a digital asset, the government may designate any data, database, IT network, or communications infrastructure as CII under the IT Act of 2000. A prison sentence of up to 10 years may be imposed on anyone who illegally secures access to or attempts to secure access to a protected system.

The Office of the Registrar General and Census Commissioner, India, declares that the computer resources related to the Census Monitoring and Management System, Self Enumeration and Civil Registration System (CRS) web portals, mobile applications for House Listing, Population Enumeration, and National Population Register updation, are critical information infrastructure (CII). Computer resources set up and installed at the National Data Centre, Office of the Registrar General and Census Commissioner, Delhi, Disaster Recovery Site and Data Centers at Bengaluru and Lucknow, as well as linked databases such as the NPR database, Census database, and CRS database have also been declared to be CII. Under the law, the computer resources of all associated dependencies of the aforementioned entities have also been designated as “protected systems.”

What is National Population Register (NPR)?

A database called NPR contains a list of all regular citizens of the nation. A person who has lived somewhere for at least six months and plans to stay there for at least another six is considered to be a usual resident for the purposes of NPR. Its goal is to compile a thorough database of all citizens who reside in the nation. It is produced during the “house-listing” phase of the Census through house-to-house enumeration. The NPR was initially compiled in 2010, and it was then updated in 2015.

The census collects data on the size, distribution, socio-economic, demographic, and other characteristics of the country’s population. The Census was initiated in 1872 by British Viceroy Lord Mayo. It aided in the formulation of new policies and government programs to address community needs. In 1881, India conducted its first synchronous census. Since then, censuses have been conducted every ten years. The Office of the Registrar General and Census Commissioner, India, under the Ministry of Home Affairs, Government of India, is in charge of conducting the decennial Census.