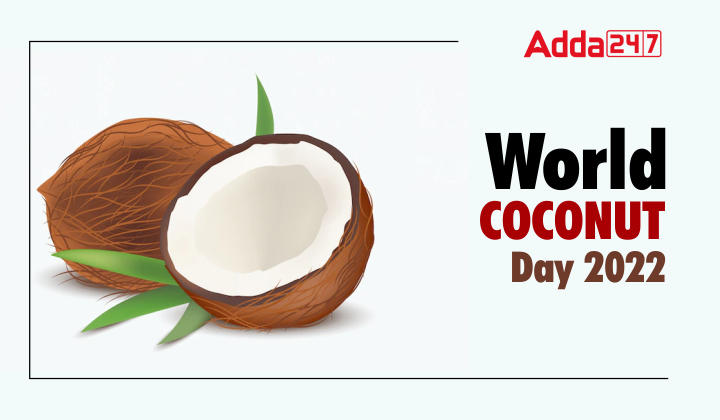 World Coconut Day 2022: Every year 2nd of September is marked as World Coconut Day. World Coconut Day is observed to highlight the importance and benefits of Coconut. World Coconut Day also marks the formation of the Asian Pacific Coconut Community(APCC). More than 80 major coconut-producing countries including India are members of APCC. Indonesia is the leading producer while India ranks at third position in terms of producing coconut. Coconut is regarded as one of the most useful plants in the world. Coconut Plant is referred to as the “tree of life”. It provides many useful materials such as food, fuel, cosmetics, medicine, building materials, etc. In this article, we have discussed the History, Significance, and Theme of World Coconut Day 2022.

World Coconut Day is observed to aware people the significance of coconut. Each and every part of coconut has certain benefits. The tender white flesh inside the coconut is used in preparing varieties of dishes. The Oil, Milk, and Water extracted from coconut are used for both cooking and non-cooking purposes. Products like Doormats, Roofs, and Huts are prepared from the husks and leaves of coconut. Coconut butter, coconut cream, and coconut oil are the staple byproducts that are used in beauty products. Coconut water is the most preferred drinks of summer and it is much beneficial for health.

Various events are organized in different parts of India on World Coconut Day by the Coconut Development Board. National awards are awarded to those who have excelled in coconut farming, industry, and other coconut related activities. In 2019, Assam was considered as the future major coconut producing state in India. Coconut is cultivated in approximately 33,493 hectares area of the seven North Eastern states. In Assam alone 20,368 hectares are under coconut cultivation.

Ans. World Coconut Day 2022 is being celebrated on 2nd September.

Q.3 Why is World Coconut Day being commemorated?

Ans. To mark the anniversary of the formation of Asia Pacific Coconut Community(APCC) World Coconut Day is commemorated.