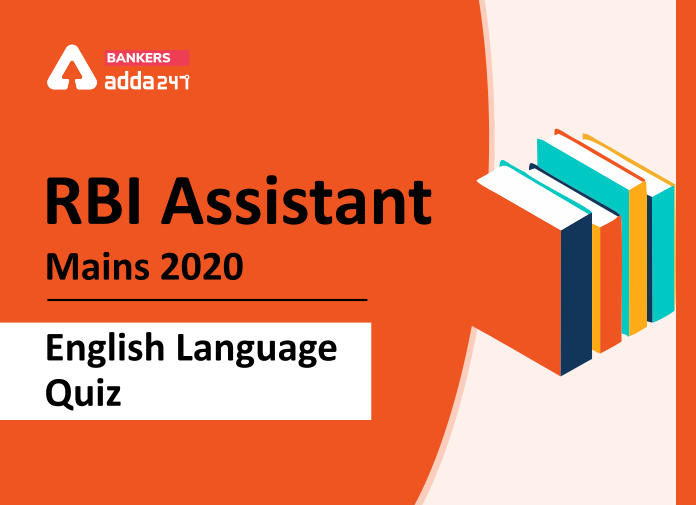 Directions (1-3): In each of the following questions, a sentence/a group of sentences is given divided into four parts and have a blank. Either one or none of the parts have an error. Choose the part which is erroneous and fill the blank with a suitable word which would make the sentence grammatically and contextually correct.

Directions (4-8): In the following questions, a paragraph is given with three blanks, followed by six words. You have to choose the most suitable combination of words among the alternative options, that will fill the blank coherently, forming a grammatically correct and contextually meaningful paragraph. If none of the given combination is appropriate to fill the blank, mark option (e) i.e. “none of these” as your answer choice.

Q4. The Centre has moved quickly to defuse a potentially ______________ controversy over the charge of Hindi imposition. It is quite apparent that the NarendraModi government did not want the language issue to acquire _______________ importance at a time when it is embarking on its second innings with a huge mandate. Further, given the impression that the ruling party does not have much of a presence in South India, barring Karnataka, it did not want to be seen as being ______________ to the concerns of southern States, especially Tamil Nadu.

Q6. After the extraordinary mandate the BJP won, two ideas have been put forth: that Indians have ________________ adopted Hindutva and that they want the country “saved” by a strong leader. What nobody seems ready to ______________ yet is the colossal nudge that social media and partisan mainstream television gave to creating this twin narrative in the popular _____________.

Directions (9-13):  In each of the questions given below four words are given in bold. These four words may or may not be in their correct position. The sentence is then followed by options with the correct sequence of words in order to make the sentence grammatically and contextually correct. If the sentence is correct as it then select option (e) as your choice.

Q10. Jharkhand faces the same malaise (A) that many other small Indian cities do—a crippling (B) lack of industrial(C) activities that can create (D) jobs.

Q11.The indicator (A) of Ranchi’s economy, representative of a economic (B) of India’s up-and-coming cities, is also a good character(C) for why India’s slew (D) growth is now down to less than 5%.

Q12.In the 18thconverted(A), British Judge TilmanHenckell floated the Sunderbans Plan. Under this plan, known as the first land reform initiative (B) in the state, the vast wasteland was century (C) into agricultural land and the revenue (D) was distributed among the people.

Q13.The warheads (A) capability of the Avangard hypersonic missile makes it difficult to trajectory(B) its predict(C), and gives it the ability to protect itself from air and ballistic missile defences by delivering nuclear manoeuvring(D) to targets

Get the top selling video course and books for RBI Assistant Mains 2020 Preparation:

Directions (14-15): In each of the questions given below five words are given in bold. These five words may or may not be in their correct positions. The sentence is then followed by options with the correct combination of words that should be interchanged with each other in order to make the sentence grammatically and contextually correct. Find the correct combination of the words that replace each other. If the sentence is correct as it then select option (e) as your choice.

Q14. Oil extended its(A)escalated price(B) surge from Friday as the(C) fallout between the US and Iran (D)dramatic after the (E)assassination of one of the Islamic Republic’s most powerful generals.

Sol. There is an error in the part (B) of the sentence. The use of the preposition ‘on’ is incorrect. The correct preposition to be used is ‘under’. The blank seems to be filled by a verb. People can console themselves with a thought. Among the given verbs, the verb ‘console’ provides the correct context to the blank. Hence, option (b) is the correct answer.

Vindicate [verb] means ‘to clear of accusation, blame, suspicion, or doubt with supporting arguments or proofs’;

Engender [verb] means ‘give rise to’;

‘Before the evening of May 6th, and despite the miserable state of their country’s democracy under President RecepTayyipErdogan, Turks could console themselves with the thought that, on election day, they could anyway vote freely.’

Sol. There is an error in the part (C). The phrase ‘to flee to Bangladesh in 2017’ in part (D) suggests that the tense of the sentence should be past. The use of the phrase ‘will force’ is erroneous. It should be replaced with ‘forced’.

Commensurate [adjective] means ‘to be in proportion or corresponding in degree or amount’;

The blank seems to be filled by an adjective. A case against journalists can be ‘absurd’, ‘relevant’ or otherwise. Among the given options, the word ‘absurd’ provide the correct context to the blank.

‘From the beginning, the case against the journalists was absurd. The pair had been working on an investigation into the killing of ten men from the Rohingya Muslim minority in Rakhine state, where soldiers forced more than 700,000 Rohingyas to flee to Bangladesh in 2017, murdering a further 7,000 or so.’

Sol.  There is an error in the part (D). The comparative adjective is not preceded by ‘the’. The word ‘better’ should be replaced with the word ‘best’.

Galvanise [verb] means ‘to excite or inspire (someone) to action’;

The blank seems to be filled by a verb. Hiring practices are something which companies can assess.

Among the given verbs, the word ‘assess’ provides the correct context.

‘Perhaps the oldest management cliché is that “people are our most important asset”. If that were true, companies would rigorously assess their own hiring practices, and record, to ensure that they are indeed recruiting the best people.’

Sol. Figurine (v) means a statuette, especially one of a human form

Capricious (adj) means given to sudden and unaccountable changes of mood or behaviour.

Gainsay (v) means deny or contradict (a fact or statement).

Thick-skinned (adj) means showing or feeling no concern for others’ feelings.

Hence, from the given options only option (d) will fit the blanks to make the passage contextually as well as grammatically correct.

Lambaste (v) means criticize (someone or something) harshly.

Epithet (adj) means an adjective or phrase expressing a quality or attribute regarded as characteristic of the person or thing.

Begotten (v) means cause; bring about

Hence, from the given options only option (b) will fit the blanks to make the passage contextually as well as grammatically correct.

Promptly (adv) means with little or no delay; immediately

Hence, from the given options only option (c) will fit the blanks to make the passage contextually as well as grammatically correct.

Devout (adj) having or showing deep religious feeling or commitment.

Pragmatic (adj) means based on practical judgments rather than principles

Hence, from the given options only option (d) will fit the blanks to make the passage contextually as well as grammatically correct.

Sol. Recidivism (n) means the act of continuing to commit crimes even after having been punished

Substantially (adv) means to a great or significant extent.

Hence, from the given options only option (a) will fit the blanks to make the passage contextually as well as grammatically correct.

Sol. The correct sequence of the given words is CDAB.
In the given sentence the order of the words which make the most contextual and grammatical sense is option (d) .Hence the answer would be (d).

Proportion: a part, share, or number considered in comparative relation to a whole.

Sol. The correct sequence of the given words is ABCD.

In the above given sentence the words are arranged in a contextually and grammatically correct manner hence the answer would be option (e) i.e. no rearrangement required.

Malaise: a general feeling of discomfort, illness, or unease whose exact cause is difficult to identify.

Crippling: causing a person to become unable to walk or move properly.

Sol. The correct sequence of the given words is CDAB.
In the given sentence the order of the words which make the most contextual and grammatical sense is option (c) .Hence the answer would be (c).

Slew: a large number of
indicator: a thing that indicates the state or level of something.

Character: the mental and moral qualities distinctive to an individual.

S12. Ans. (b)
Sol. The correct sequence of the given words is CBAD.
In the given sentence the order of the words which make the most contextual and grammatical sense is option (b) .Hence the answer would be (b).

Converted: having been adapted to be suitable for a new purpose.

Initiative: the ability to assess and initiate things independently.

Revenue: is the income that a business has from its normal business activities.

S13. Ans. (b)
Sol. The correct sequence of the given words is DCBA.
In the given sentence the order of the words which make the most contextual and grammatical sense is option (b) .Hence the answer would be (b).

Manoeuvring: a movement or series of moves requiring skill and care

Trajectory: the path followed by a projectile flying or an object moving under the action of given forces.

Warheads: explosive or toxic material that is delivered by a missile, rocket, or torpedo. It is a type of bomb.

Sol. The given sentence will become grammatically and contextually correct if (A) and (D) are interchanged. Therefore, option (c) is the most suitable answer choice.

Sol. The given sentence will become grammatically and contextually correct if (A) and (D) and (B) and (E) are interchanged. Therefore, option (d) is the most suitable answer choice.

Download PDF of this English Quiz for RBI Assistant Mains 2020

If you are preparing for RBI Assistant Mains 2020, then you can also check out a video for English Language below: