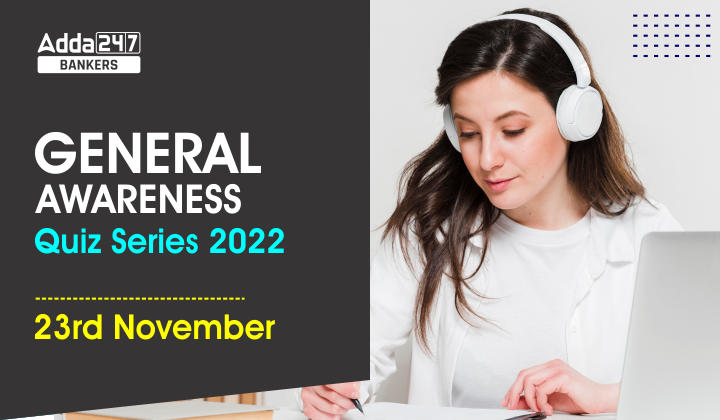 General Awareness Quiz Series 2022: 23rd November: Hello Students, General Awareness is an essential part of all government exams. It’s better to prepare this section daily and revise the same using the factsheet provided. Bankersadda team has brought you up a new series in which we will come up with 10 questions and answers, other options of the question have related news to them. So don’t miss reading the solutions.

Q1. India will take over the chair of the Global Partnership on Artificial Intelligence. The meeting will be held in ______ for 2022-23

Q2. Which state came on top for the installed capacity of grid – interactive renewable power?

Q4. Which of the following is incorrectly matched?

Q5. Which bank has launched 7th edition of Evolve for MSMEs?

Q6.Who is the author of “Monetising Innovation” and ‘Nalanada – Until we meet again’?

Q7. Google is paying tribute to Marie Tharp. She is related to which field?

Q8. Match the Award and awardee:

Q9. Which of the following index is published by Economic Intelligence Unit?

(b) Freedom in the world Index

Q10. Which of the following F1 racing driver has announced its retirement in November 2022?

India will take over the chair of the Global Partnership on Artificial Intelligence for 2022-23 at a meeting of the body in Tokyo, the Ministry of Electronics and IT said. This development comes on the heels of assuming the Presidency of the G20, a league of the world’s largest economies.

The 13th edition of bilateral exercise between the Indian and the Royal Oman navies, Naseem Al Bahr-2022, commenced off the coast of Oman

New Zealand’s voting age has been ruled discriminatory by the country’s highest court. The case was brought by advocacy group make it 16 in 2020, in a bid to lower the voting age from 18 to 16.

Kazakh President Kassym-Jomart Tokayev has secured a second term in a snap election, winning 81.3 percent of the vote.

Axis Bank has launched the seventh edition of ‘Evolve’ for MSMEs with the theme of ‘Indian SMEs: Shifting Gears for Next Level Growth’. ‘Digitalisation to Building Indian SMEs’ and ‘Export Opportunities for SMEs in the New World Order’ were some of the other key themes at the launch.

The Reserve Bank of India (RBI) allowed HDFC Bank Ltd and Canara Bank Ltd to trade in Rupees with Russia.

Gautaam Borah, a senior management professional and the author of the widely acclaimed book ‘Monetising Innovation’, launches his new book ‘Nalanada – Until we meet again’. The book was launched by legendary writer Ruskin Bond.

Google is paying tribute to American geologist and oceanographic cartographer, Marie Tharp, who helped prove the theories of continental drift. She co-published the first world map of ocean floors.

Continental Drift theory: theory states that the Earth’s continents have moved over geologic time relative to each other, thus appearing to have “drifted” across the ocean bed.

Danish Manzoor Bhat, originally hailing from Kashmir Valley, was honoured with Jaipur Foot USA’s first Global Humanitarian Award this week at a ceremony held at the Consulate General of India in New York.

Kathak exponent Dr. Uma Sharma has received the prestigious ‘Sumitra Charat Ram Award’ for Lifetime Achievement in recognition of her contribution in the field of Indian classical music and dance.

The UNESCO-Madanjeet Singh Prize for the Promotion of Tolerance and Non-Violence, for this 2022 Edition, has been given to Franca Ma-ih Sulem Yong from Cameroon, President of the NGOs #Afrogiveness and Positive Youths Africa.

Varieties of Democracy (V-Dem) is a unique approach to conceptualizing and measuring democracy.

German racing driver Sebastian Vettel has retired from Formula One racing. Vettel won four Formula One World Championships between 2010 and 2013 while competing for Red Bull and previously spent six seasons with Ferrari