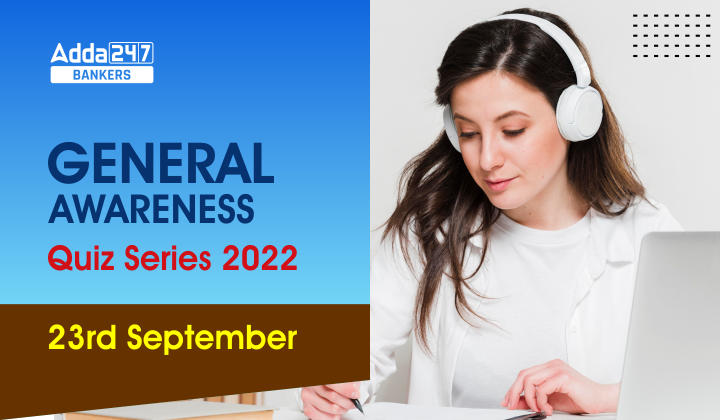 General Awareness Quiz Series 2022: 23rd September: Hello Students, General Awareness is an essential part of all government exams. It’s better to prepare this section daily and revise the same using the factsheet provided. Bankersadda team has brought you up a new series in which we will come up with 10 questions and answers, other options of the question have related news to them. So don’t miss reading the solutions.

Q1. Which of the following Digital Payments initiative are not launched at the Global Fintech Fest 2022?

Q2. Which of the statement is incorrect about UPI Lite?

(b) It is an offline mode of digital transaction

(c) The total limit of the UPI Lite digital payment mode on the wallet on a device would be ₹5,000 at any point in time

Q3. Which of the following is not appointed in September as teustees of the PM Cares fund?

Q4. Who has won the Chennai Open 2022 and which to which game this open is related to?

Q5. What is the estimated projection of India for FY 2023 by Asian Development Bank (ADB)?

Q6. With which country Abhyas drill was organized by India and which armed force of India participated in it?

Q7. Project Saaras for menstruation health is an initative of which embassy in India in conjunction with Ngo Khushi?

Q10. Which of the pairs of Summit/ Event with the Venue is correctly matched?

Now that UPI Lite on BHIM App will be enabled, the users will be able to make small-value transactions in a near-offline mode.

The upper limit of a UPI Lite payment transaction will be ₹200. The total limit of the UPI Lite digital payment mode on the wallet on a device would be ₹2,000 at any point in time. Customers of these eight banks would be able to use UPI Lite digital payment system. These are Canara Bank, HDFC Bank, Indian Bank, Kotak Mahindra Bank, Punjab National Bank, State Bank of India (SBI), Union Bank of India and Utkarsh Small Finance Bank.

Mukul Rohtagi is the 14th Attorney General of India.

Asian Development Bank (ADB) has pared its 2022-23 growth projection for India’s economy to 7% from 7.5% estimated in April.

Abhyas drill: The Coast Guards of India and the United States participated Off the coast of Chennai in the massive Abhyas drill or the Abhyas joint drill.

Project “Saaras”: An initiative of the Israeli embassy in India in conjunction with NGO Khushii, which aims to raise awareness about menstruation health and cleanliness.

In 2023, India will hold its first MotoGP World Championship race at the Buddh International Circuit in Greater Noida.

Shri Narendra Singh Tomar, the union minister for Agriculture and Farmer’s Welfare, virtually addressed the Leeds-2022 conference in New Delhi, which was hosted by the Federation of Indian Chambers of Commerce and Industry (FICCI).