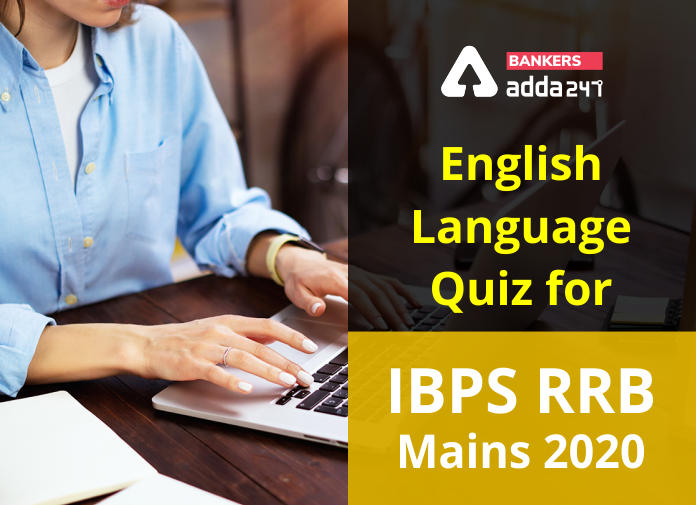 Directions (1-5): In the following questions, three sentences are given which may or may not contain grammatical or contextual errors. Choose the option reflecting the sentences that is/ are grammatically and contextually correct. If all the given sentences are correct, choose option (e) i.e. “All are correct” as the answer choice.

Q1. (I) No one was reported injured in either of this incident, according to reports on the website Aviation Safety Network.

(II) The villagers claimed that they had asked for five more days to hand over the land to the builder.

(III) Sri Lanka is going through a major political upheaval that is raising constitutional issues.

Q2. (I) Every day we see people brazenly driving through red lights, breaking queues with impunity or getting their way through bribes.

(II) Sirisena probably believes that collaborating with Rajapaksa who he successfully challenged in the 2014 presidential elections, will ensure his second term.

(III) No sooner we got the news, we sent a team to the village to speak to the people about their demands.

Q3. (I) Parts of Britain woke up to thick snow as the country experienced one of the coldest October days in a decade.

(II) In the phase of this unpredictability, our daily life is filled with moments of faith.

(III)  This is one of the novels that has made a mark in my life.

Q4. (I) Not until I saw John with my own eyes did I really believe he was safe.

(II) Only if everybody agreed would I accept this position.

(III)  Only when he needed some help did he call me.

Q5. (I) Ted knows that he would have no problem speaking in public if he would only overcome his fears instead of running away from them.

(II) Lest we don’t forget the men and women who died for our country, we always honor our veterans.

(III) No lesser than 200 traders, whose shops and goods were destroyed, were compensated by the Rivers State Governor.

The much-anticipated Indian-made trainset was _____(12)_____ to the public by Indian Railway Board Chairman AshwaniLohani on Monday at the ICF. Train 18 will undergo the mandatory safety checks before being inducted into the Railways in the coming months.

Speaking at the launch function, Mr. Lohani said Train 18 will be a game- changer for the Indian Railways. He said it can reach a maximum speed of 160 km per hour. The train can both accelerate and pull to a stop rapidly, thereby _____(13)_____ much less energy, he added. Mani, general manager of ICF, said the train was completed in a record time of 18 months after it was _____(14)_____ in 2016. About 80% of the design, technology and manufacture of Train 18, a _____(15)_____ to ‘Train 20’, is Indian. The coaches in the fully air-conditioned train are linked with advanced bridge plates, leaving the train free of the shaky gangways Indian train travellers are used to.

Get the top selling video course and books for IBPS RRB Mains2020 Preparation:

Sol. Only sentence (I) is grammatically incorrect. In order to correct the sentence, replace “this incident” by “those incidents” as phrases like “one of”, “either of”, “neither of”, “every one of” etc. take plural noun or pronoun with them to frame a precise grammatical structure for the sentence.  Sentence (II) and (III) are grammatically correct. Hence, option (b) is the most suitable answer choice.

Sol. Sentences (II) and (III) are grammatically incorrect. It is to be noted in sentence (II) who should be used to refer to the subject of a sentence; while Whom should be used to refer to the object of a verb or preposition. Therefore, to correct sentence (II), replace “who” by “whom” as the pronoun is required to refer the object “Rajapaksa”. Moreover, in sentence (III) the correct phrase should be “No sooner did we get the news…” as in the cases, where a sentence begins with “no sooner”, the auxiliary verb is placed before the subject. Sentence (I) is grammatically correct. Hence, option (a) is the most suitable answer choice.

Sol. Sentence (III) is grammatically incorrect. In this sentence, the verb you’re considering is inside a relative clause—“that have made a mark in my life.” It’s called relative clauses because it begins with one of the relative pronouns: “that.” “That” is the subject of the relative clause, and it takes its number from the plural noun to which it refers. In this case, that word is “novels,” so you use a plural verb: “one of the novels that have made a mark” is the correct sentence. Sentences (I) and (II) are grammatically and contextually viable. Hence, option (c) is the most suitable answer choice.

Sol. All the given sentences are grammatically and contextually meaningful.  It is to be noted that when only after, only if, only in this way etc. are placed at the beginning of the sentence for rhetorical effect, the subject and auxiliary are inverted.  We use inversion in several different situations in English. Inversion just means putting the verb before the subject. Since, all the three sentences are devoid of any grammatical errors, option (e) becomes the most suitable answer choice.

Sol. Sentence (II) and (III) contain errors in them. In sentence (II) replace the clause “we always honor our veterans” by “we should always honor our veterans”, In addition to this, the conjunction lest has a negative meaning itself therefore, it should not be used with not. The only auxiliary verb that can follow lest is “should”. Next, in sentence (III), “lesser” should be replaced by “fewer” as fewer means “not as many.” We use fewer with countable nouns like cookies; while less means “not as much.” We use less with uncountable nouns like milk. Since, only sentence (I) is grammatically and contextually correct, option (c) becomes the most suitable answer choice.

Empirical [adjective] means ‘based on, concerned with, or verifiable by observation or experience rather than theory or pure logic’;

Contentious [adjective] means ‘causing or likely to cause an argument; controversial’;

Conniving [adjective] means ‘given to or involved in conspiring to do something immoral, illegal, or harmful’;

From above, we can understand that the alternative which will fill the given blank is only (A). Hence, the option (b) is the correct answer.

Sol. façade [noun] means ‘the principal front of a building, that faces on to a street or open space’;

Frontage [noun] means ‘the façade of a building’;

Patent [noun] means ‘a government authority or licence conferring a right or title for a set period, especially the sole right to exclude others from making, using, or selling an invention’;

Surrogate [noun] means ‘a substitute, especially a person deputizing for another in a specific role or office’;

From above, we can understand that the alternative which will fill the given blank are (B) and (C). Hence, the option (a) is the correct answer.

Sol. nonpareil [adjective] means ‘having no match or equal; unrivalled’;

Foremost [adjective] means ‘most prominent in rank, importance, or position’;

From above, we can understand that the alternative which will fill the given blank are (A), (B) and (D). Hence, the option (c) is the correct answer.

Sol. tenancy [noun] means ‘possession of land or property as a tenant’;

Allure [noun] means ‘the quality of being powerfully and mysteriously attractive or fascinating’;

Ethos [noun] means ‘the characteristic spirit of a culture, era, or community’;

From above, we can understand that the alternative which will fill the given blank are (A) and (B). Hence, the option (d) is the correct answer.

Sol. Persuade [verb] means ‘induce (someone) to do something through reasoning or argument’;

Exhort [verb] means ‘strongly encourage or urge (someone) to do something’;

Haul [verb] means ‘pull or drag with effort or force’;

Pull [verb] means ‘exert force on (someone or something) so as to cause movement towards oneself’;

From above, we can understand that the alternative which will fill the given blank are (C) and (D). Hence, the option (a) is the correct answer.

Sol. Supersede [verb] means ‘take the place of (a person or thing previously in authority or use)’;

Substitute [verb] means ‘a person or thing acting or serving in place of another’;

Underwrite [verb] means ‘undertake to finance or otherwise support or guarantee (something)’;

From above, we can understand that the alternative which will fill the given blank are (A), (B) and (D). Hence, the option (a) is the correct answer.

Sol. Unveil [verb] means ‘remove a veil or covering from, in particular uncover (a new monument or work of art) as part of a public ceremony’;

Besiege [verb] means ‘be inundated by large numbers of requests or complaints’;

From above, we can understand that the alternative which will fill the given blank is only (C). Hence, the option (c) is the correct answer.

Sol. Expend [verb] means ‘spend or use up (a resource such as money or energy)’;

Sap [verb] means ‘drain someone of (strength or power)’;

From above, we can understand that the alternative which will fill the given blank are (A), (B), (C) and (D). Hence, the option (e) is the correct answer.

Formulate [verb] means ‘express (an idea) in a concise or systematic way’;

Renege [verb] means ‘go back on a promise, undertaking, or contract’;

From above, we can understand that the alternative which will fill the given blank are (B) and (C). Hence, the option (c) is the correct answer.

Sol. Predecessor [noun] means ‘a person who held a job or office before the current holder’; ‘a thing that has been followed or replaced by another’;

Antecedent [noun] means ‘a thing that existed before or logically precedes another’;

Accretion [noun] means ‘a thing formed or added by gradual growth or increase’;

Muse [noun] means ‘a person or personified force who is the source of inspiration for a creative artist’;

From above, we can understand that the alternative which will fill the given blank are (B) and (D). Hence, the option (d) is the correct answer.

Download PDF of this English Quiz for IBPS RRB Mains 2020

If you are preparing for IBPS RRB Mains Exam, then you can also check out a video for English Language below: