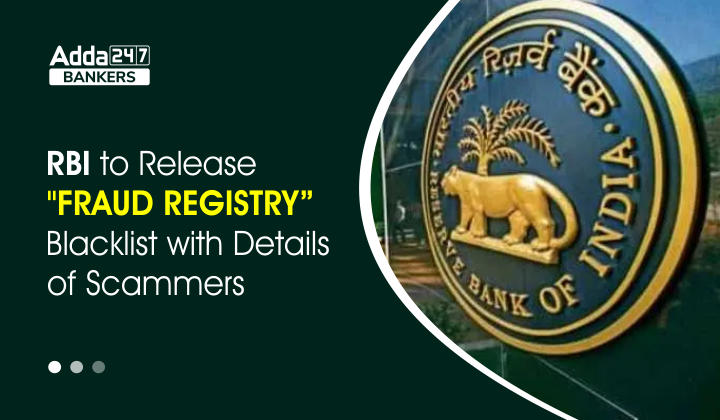 RBI to release Fraud Registry: Today a large number of Fraudsters are defrauding banks as well as customers. To minimize and regulate these activities the Reserve Bank of India(RBI) is set to release a Fraud Registry Blacklist. The Fraud Registry will consist of data such as IP (Internet Protocol) Address and Phone Number that is being used for fraud. A mechanism is being developed through which banks will be able to report the details of the scammers to the Reserve Bank of India(RBI). There is no particular timeline for the development of the Fraud Registry Blacklist. To bring out the best and stop these scammers from doing fraud RBI has been holding internal meetings, particularly with its supervision and payments and settlements departments. The opinion of the other departments and stakeholders are also considered.

RBI to release “fraud registry” blacklist with details of Scammers

A new reporting system is being developed by the RBI to prepare a fraud registry blacklist along with details of scammers. The fraudsters will be identified on the basis of their location, IP Address, contact number, etc. According to Executive Director Anil Kumar Sharma, the scammers will get blocked once their complete details are available from the fraud registry. He said that in the coming time the fraudsters will be registered. The entire team is working to prepare the fraud registry and to get the information they are in constant touch with all the agencies. Fraud registry will be able to handle certain problems such as at present every year an ombudsman receives more than 40% of complaints involving credit cards, debit or ATM cards, and online and mobile banking. 10% of all complaints are about situations where someone attempted to use an ATM to withdraw cash but found that despite the money being deducted from their account but the cash was not withdrawn.

One Nation One Ombudsman Strategy

In November 2021 the RBI launched Integrated Ombudsman Scheme under the One Nation One Ombudsman. Ombudsman is an officer who handles public complaints brought against regulated entities. If a customer has any issue related to the bank then under the present regulation they can solve their problem within 30 days. If the problem is still left unsolved then they can file a complaint with the RBI’s Integrated Ombudsman. In the current fiscal year, RBI received more than 4 lakh customer complaints. The complaints have roughly increased by 9% from the 2020-2021 fiscal year. The three different schemes: one for banks, one for non-bank financial organizations, and one for digital transactions were merged under the integrated ombudsman. In 2019-2020 the turnaround time of complaints was 95 days which has been further reduced to 38 days.