There are two categories when it comes to the  Staff of a Bank namely: Clerical Cadre and Officer Cadre. Depending upon the exam he/she has appeared for they are appointed either in the two cadre.Most of the students wants to know upto what level a clerk can be promoted?. if a clerk can become a PO or not?. We will discuss all these questions in this article.  The candidate once recruited as a clerk cannot be promoted as a probationary officer  as the probationary officers are directly recruited and not internally promoted but this does not mean that a candidate joined as a clerk cannot be promoted to officer cadre. After completing a certain time, clerk can be promoted as TO ( Trainee Officer) or JMGS – 1 (Junior Management Grade Officer Scale -1).

Ways Of Promotion For A Clerk:

Internal Examination:  There are internal examination that are conducted for promition in PSBs conduct every 2 years for employees wanting to make a shift to the officer cadre. A candidate working as a clerk but interested in joining as an officer can take this exam. There are certain eligibility criteria associated with it which candidates are require to fulfill for the promotion of a clerk into the officer and only those who are found to be eligible can only take up the internal exam.

(i) 3 years of service in the bank, along with the completion of the CAIIB (Certified Association of the Indian Institute of Bankers) exam,

(ii) 4 years of service, along with the completion of the JAIIB (Junior Associate of the Indian Institute of Bankers) exam,

(iii) a minimum of 6 years of service.

Though the clerk will be promoted as a Trainee Officer but there is no difference in the perks and salary received by a Trainee Officer as than that received by the Probationary Officer. The process of growth is also the same once a candidate is selected into the officer cadre which is  he/she is required to undergo probation for two years. Once the candidate successfully complete his/her probation period as TO ( Trainee Officer) is either promoted to MMGS-II or back to Clerical cadre based on his/her performance.

OJM Internal Exam: The other way through which candidate working as  a clerk can get into officer cadre is the OJM internal exam. This is another internal exam which constitute of  written & interview that helps a candidate to switch from clerical cadre to officer cadre. This test also has certain  eligibility criteria which a candidate is require to fulfill to become an officer: a candidate working on a clerical cadre should have a minimum of 6 years of service under the fast track promotion channel or  he/she should have 12 years of service under normal promotion channel. If a candidate gets promotion through this exam then the perks are equivalent to that of a PO but the salary is relatively lesser.

Direct recruitment as PO: This is one of the way through which you can become  a PO much earlier than the other two ways as this doesnot require a candidate to wait for certain years to get into the officer cadre. Every year many PSBs conduct their recruitment process to directly hire PO. Any fresher having a graduation degree from a recognized university can apply for this exam.

The table given below will give you more detail idea about the different scale and minimum time require to get promoted to next scale: 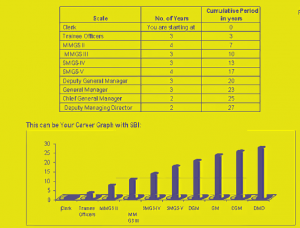 The  rules and regulation to become an officer depend on many factors as well for ex:  age limits, number of chances of promotion, further educational qualification and so on and it differs bank to bank. You can find all these information in the circulars released by banks from time to time.

Ans. Yes! as written above, a clerk can become manager after fulfilling the certain eligibility given above.

Q. Can a clerk become po?

Ans. Clerk cannot become a PO but he can be promoted to TO ( Trainee Officer) which is equivalent to PO.

Q. What is major difference between clerk and PO?

Ans. The major difference is in the salary and the type of work involved in the two job profiles. A clerk mainly do clerical work while PO does managerial work.

Q. What is the salary of a clerk in Bank?

Q. Is clerk a good job than Bank PO?

Ans. It is good job as it offers less workload and limited working hours unlike PO.