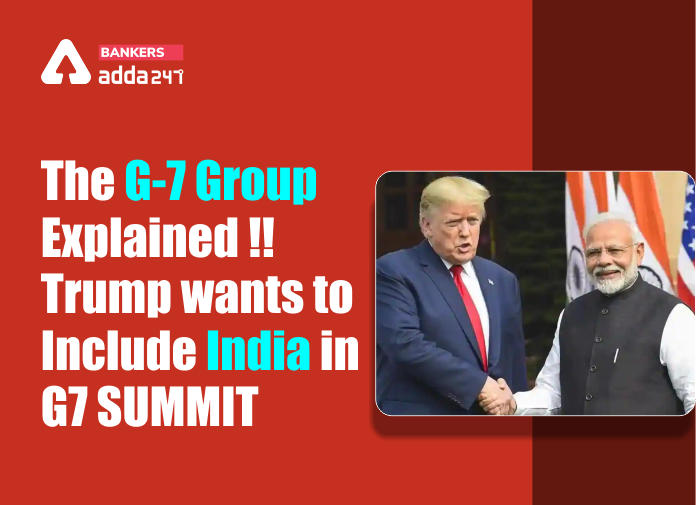 What is G7 – The G7 Group of countries are 7 most powerful economies in the world. US President Donald Trump recently called the existing G-7 Group “very outdated group of countries” and mentioned that he wanted to include India, Russia, South Korea, and Australia in the group. Trump also postponed the summit which was scheduled to be held through June 10-12 at Camp Davis in the US and said “I’m postponing it because I don’t feel that as a G7 it properly represents what’s going on in the world.” If you are wondering what is the G7 and what it does then keep on reading as here we will be discussing everything about the G7 Group of nations.

What is G7 Group?

The Group of Seven or G7 is an organisation made up of 7 of the world’s largest economies or advanced economies. Today G7 are reckoned as the seven wealthiest and most advanced nations in the world and fill out numerous global top lists-

Together, the G7 countries represent 40% of global GDP and 10% of the world’s population.

Which countries are in G7 Group?

This intergovernmental organisation was formed by the top economies in 1975, Canada joined in 1976 and the European Union began attending in 1977. The G-7 was known as “G-8” for many years after Russia joined in 1997 but was expelled as a member in 2014 following the annexation of the Crimea region of Ukraine. The following is the list of current G-7 countries

Why is China not a member in G7 Group?

Due to its huge population the per capita gross national income of China is less and as its economy is not fully modernized it is not included in G7 countries. China is a part of the wider G-20 group of nations.

What is the purpose of the G7?

Originally the group was formed to exchange ideas and solutions to issues in the world. Each member of the Group of Seven Countries takes over presidency for a year on a rolling basis and hosts the annual summit meeting. Some of the subjects discussed in past summits were Energy policy, climate change, HIV/Aids and global security.

What’s the difference between G7 and G20?

Although having similar names the G20 is a larger group of countries with focus on global economy- “Summit on Financial Markets and the World Economy” and it represents 80% of global GDP. G20 consists of 19 countries and the European Union. The following is the list of 19 countries-

Why Trump wants to include India in G7 Group?

The US holds the presidency this year for the G7 Group and Trump wanting to invite India is clear indication of Inida’s growing international stature. The US president has already formally send an invitation to Prime Minister Narendra Modi to attend the G7 summit to be held this year and he desires to expand the scope of the grouping of major world economic powers.

Trump has also accused the current member of G7 not properly representing the ongoing Coronavirus crisis and other issues taking place in the world and apart from India, he also wants to include Russia, Australia and South Korea as possible additions in the group.