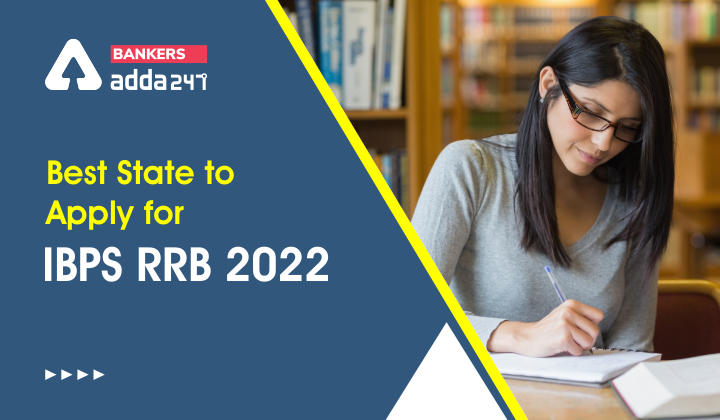 Best State to Apply for IBPS RRB 2022: The Institute of Banking Personnel Selection (IBPS) has released the IBPS RRB Notification 2022.  IBPS has activated the apply online registration link for IBPS RRB Officer Scale I, II, III, and Clerk on 7th June, and the last date to apply for the above-mentioned posts announced under IBPS RRB Recruitment 2022 is 27th June 2022. Only one question arises in the mind of all the aspirants which will be the best state to apply for IBPS RRB 2022. In this article, we are going to discuss and clear the confusion of the candidates about the best state that they should apply for.

Candidates have started filling out their online application form for IBPS RRB for several posts. A thought that has bothered all the aspirants in the state for which they should apply. Some candidates think of selecting their hometown whereas some think of opting for another state. There are a number of factors that a banking aspirant should keep as a base for selecting a particular state.

Factors: Some of the important factors that a candidate has to keep in mind when selecting a particular state for filling their application process are mentioned below:

Regional Language: For the recruitment of officers scale-1 and office assistant candidates should have studied the language of the state in standard 8 or any level above standard 8 from any Government recognized board. If a candidate has the certificate then they will be considered proficient in that local language. If a candidate does not meet the given requirement then they will be given a time of six months from the date of joining to acquire the proficiency. The six months period can be extended by the Board of RRBs but the extension should not be beyond the probation period.

Cut Off: Before applying for a particular state an aspirant should analyze the cut-off trend of the last 3-4 years. Some of the states come under the category of high cut-off, some under the medium, and some of them have a low cut-off. Cut off of a particular state depends on several factors such as the difficulty level of the exam, the number of students who appeared in the examination, etc. So through cutoff, we cannot come to final conclusion but can get just an overview.

Best State to Apply for IBPS RRB 2022 Check in Hindi