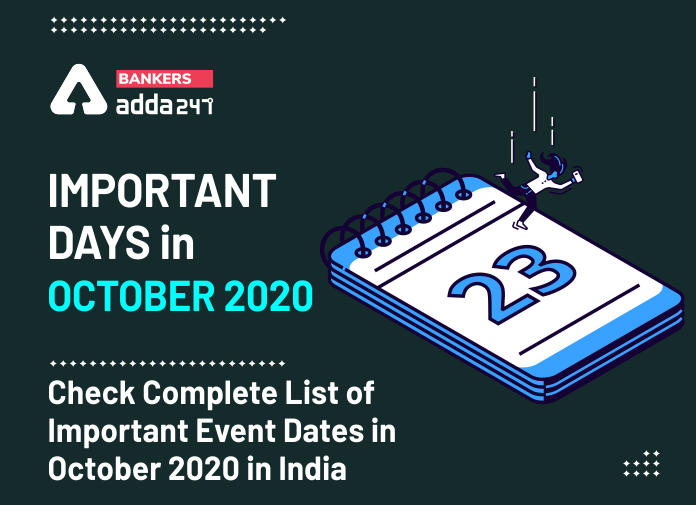 You may also like to read Important days of:

International Day of the Older Persons:- We celebrate the International day for older persons on 1st October to acknowledge and appreciate contributions made by older people in society.

Gandhi Jayanti:- Gandhi Jayanti is one of the most important days in India. In India on Gandhi Jayanti there is national holiday. It is the day when Mahatma Gandhi was born. People celebrate the day by offering prayers, performing commemorative ceremonies, and giving tributes to the Father of the Nation. The people and organisations who promote a non-violent way of life are felicitated on this day.

World Post Day or World Post Office Day:- World Post Day is celebrated each year on October 9 as the anniversary of the Universal Postal Union in 1874 in the Swiss Capital, Bern. In 1969, the UPU Congress held in Tokyo declared the day as World Post Day. Since then, countries across the world would include in the annual celebrations.

World Mental Health Day (Second Saturday of October):- October 10 is the second Saturday of 2020 and will be celebrated as the World Mental Health Day. The objective of this day is to spread awareness about mental health issues and taking efforts in supporting those. It also emphasizes on what more needs to be done to make sure that talking mental health does not remain a taboo in society.

Pregnancy and Infant Loss Remembrance Day:- The day was established in 2002 in the United States and Canada on October 15 in order to honour, celebrate, and remember babies who have died due to stillbirth, neonatal death, and other causes of infant loss.

World Students’ Day:- World Students’ Day is a celebration of diversity, multiculturalism and cooperation among students across the world. Students celebrate and show their acts of social responsibility and have gatherings on campus.

World Thrift Day:- World Thrift Day is celebrated on October 31 every year.  It was a day “devoted to the encouragement of savings all over the world”. It is a worldwide celebration day well supported by savings and responsible retail banks, schools, women’s associations, sports bodies, cultural organizations and professional agencies etc.

If you are reading this article, Welcome to #AddaKamyabiKa. We want you to be ensure about your success. To help you in achieving your goal, we have crafted a special offer for you.

Apply ‘LUCKYME’ coupon code to avail 62% discount today on any product. Hurry Up!!