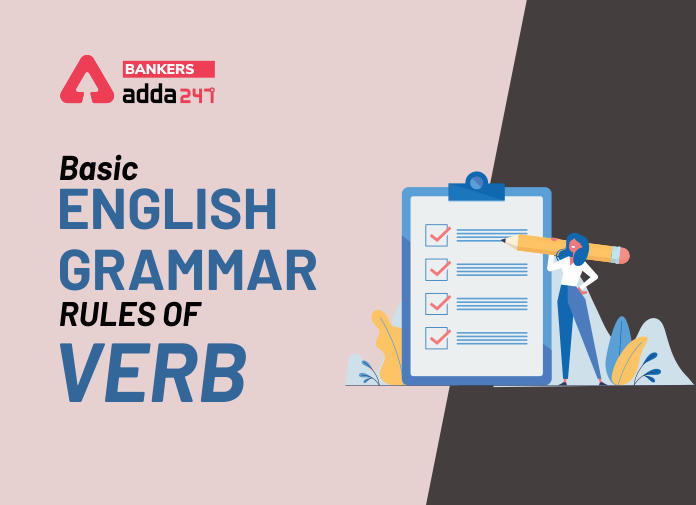 Students who are banking aspirants must be knowing the importance of English Language section. It is very important and can fetch you some very good marks if attempted carefully and with accuracy. Grammar is an important section and forms majority of the questions that are asked in the examination. In this article, we will be covering one of the most important topic of English grammar that is Verb.

Verbs have traditionally been defined as “action” words or “doing” words.

What does Mr. Ram do today morning?

He takes the class.

The action here is “taking” the class hence it is a verb.

Finite Verb: Finite Verbs are those that have a definite relation with the subject or noun.

Non-Finite Verb– These verbs cannot be the main verb of a clause or sentence as they do not talk about the action that is being performed by the subject or noun.

For ex– He was made to clean his room

Here “made” is the non-finite verb

A transitive verb is the verb which requires an object.

Example– I saw a dog

Here dog is the object.

An intransitive verb is a verb which does not requires an object.

Example– He told a joke

Here joke is the direct object

Modal verb is a verb which is used by another verb in order to express an idea such as possibility, responsibility, compulsions etc.

Example- You must come on friday

i. I shall not go out without my mother permission.

ii. I shall go to school

iii. We shall celebrate her birthday.

“will” is used to denote any event taking place in future, it can express willingness, a promise, a threat, determination etc.

i. she will help you.

ii. He will be there in your wedding.

iii. Ram will not allow him to go.

iv. Sita will not miss this opportunity.

“May” is used to show  possibility and permission.

i. Ram may come here.

“Can” refers to ability and permission.

i. Ram can do this work easily.

iii. We all  can learn this subject.

i. You must attend this function.

ii. She must go urgently.

iii. He must have full freedom.

iv. A civil servant must be honest.

v. He must be made to talk like this.

vi. This flat must be demolished in near future.

“Ought” refers to  duty or moral obligation.

i. She ought to be careful.

ii. As the member I ought to have attended that meeting.

This verb “ought” must be followed by “to”.

“Dare” refers to   challenge or the courage to do a thing.

i. She dare not oppose me.

ii. The  Minister dared the opposition to prove the charge.

“Need” refers to necessity or obligation.

Example-
i. He need not come here.

ii. It need not be purple in the Shirt.

iii. She need not have educational qualifications.