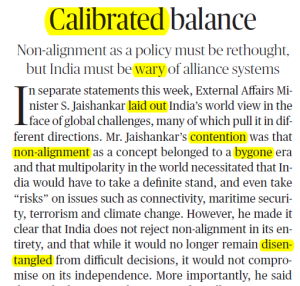 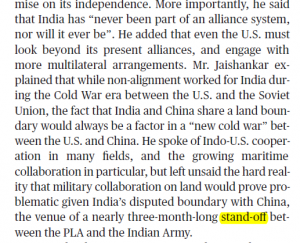 Calibrated (adjective) जांचना
Meaning:- carefully assessed, set, or adjusted.
Synonyms:- adjust, assess, average
Antonyms:- disorder, disorganize
Example:- The galvanometer can be calibrated with this resistance, which is known as a shunt.

Laid out ( verb) लगाना
Meaning:- to work out the details of (something) in advance
Synonyms:- disburse, expend
Antonyms:- hoard, neglect, save
Meaning:- Minister S. Jaishankar laid out India’s world view in the face of global challenges

Non- Alignment (noun) गुटनिरपेक्षता
Meaning:- does not support or depend on any powerful country or group of countries.
Example:- Mr. Jaishankar’s contention was that nonalignment as a concept belonged to a bygone era

Disentangled (verb) सुलझाना
Meaning:- free (something or someone) from something that they are entangled with.
Synonyms:- detach, disengage, emancipate
Antonyms:- attach, connect, tangle
Example:- it would no longer remain disentangled from difficult situations. 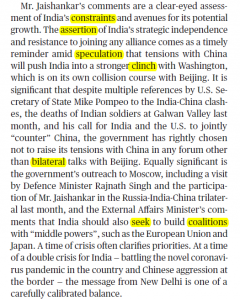 Speculation (noun) चिंतन
Meaning:- the forming of a theory or conjecture without firm evidence.
Synonyms:- belief, conjecture, opinion
Antonyms:- reality, truth, disdain
Example:- resistance to joining any alliance comes as a timely reminder amid speculation that tensions with China will push India into a stronger clinch with Washington

Clinch (verb) कड़ी
Meaning:- confirm or settle (a contract or bargain).
Synonyms:- assure, cap, conclude
Antonyms:- delay, put off, disprove
Example:- resistance to joining any alliance comes as a timely reminder amid speculation that tensions with China will push India into a stronger clinch with Washington

Bilateral (adjective) द्विपक्षीय
Meaning:- having or relating to two sides; affecting both sides.
Synonyms:- mutual, reciprocal, respective
Antonyms:- multilateral, unilateral
Example:- the government has rightly chosen not to raise its tensions with China in any forum other than bilateral talks with Beijing