Skip to content
Latest Banking jobs   »   US Treasury removes India from its... 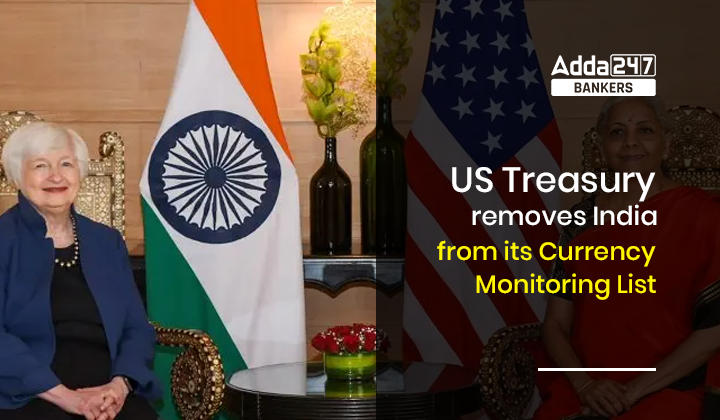 US Treasury removes India from its Currency Monitoring List: India is one of the few countries that have been removed from the United States’ Currency Monitoring List, according to data released by the Treasury Department. The US Treasury Department announced in its biannual report to Congress that Italy, Mexico, Vietnam, and Thailand had also been removed from the list.

What is the Currency Monitoring List of the United States?

The US Department of Treasury delivered its semiannual Report to Congress on the ‘Macroeconomic and Foreign Exchange Policies of the United States’. The report examines the policies of the United States’ trading partners over the last four quarters, which end in June 2022. The report also examines the Treasury’s ‘Monitoring List.‘ The list, as the name implies, closely monitors the currency practices and policies of some of the United States’ major trading partners. Once an economy is included on the list, it will stay there for at least two reports in a row, allowing the Treasury to determine whether any performance improvements are long-lasting and not just the result of one-time events. According to the report, economies are added to the list if they satisfy two or three of the 2015 Act’s requirements. In accordance with this law, the Treasury Department must evaluate the macroeconomic and exchange rate practices of the US trading partners based on three specific factors:

What was the reason for India’s removal from the list?

India and four other nations were taken off the Monitoring List because they could no longer meet all three requirements for two straight reports. On the list, India has been for about two years.

Which countries are on the United States’ Currency Monitoring List?

According to the report, China stands out among major economies due to its failure to disclose foreign exchange intervention and broader lack of transparency regarding important aspects of its exchange rate mechanism, which justifies the Treasury’s close monitoring.

How does it affect India?

As India has been removed from the list, It gives Reserve bank of India to easily regulate the foreign exchange rate of India with respect to dollar.

Which country despite exceeding all three categories was not termed as Currency Manipulator?

What happens to the country when it is on the Currency manipulator list?

A designated currency manipulator can be excluded from U.S. government procurement contracts

It creates restriction to protect its own economy from the unfair manipulations.