Skip to content
Latest Banking jobs   »   What is Aadhar: Everything You Need... 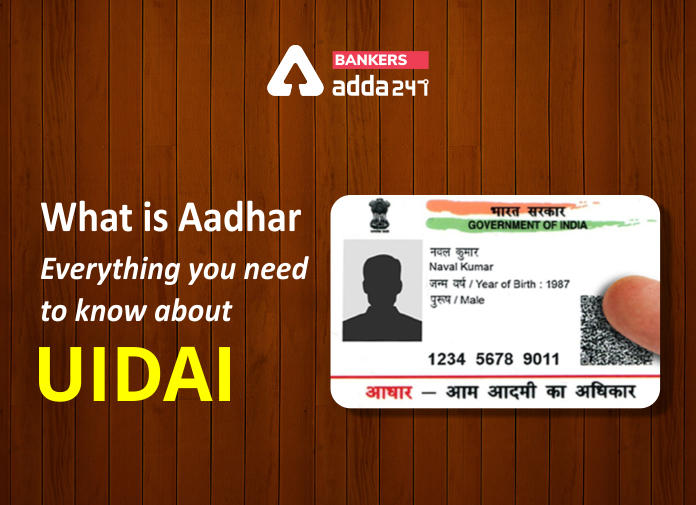 Aadhar is one of the most important document at present and hence it is even mandatory for all citizens. Aadhar card or Aadhar number is a 12 digit number. All the relevant information related to a person is available on one’s Aadhar card. To avail any government facility or government scheme, a citizen is require to have a Aadhar card. This is such a powerful instruments and timely changes have been done in this to make it more reliable and relevant.  At present tagline of Aadhaar- Mera Aadhaar, Meri Pehchan while earlier its tagline was “Aam Aadmi ka Adhikar” but now it has been changed to “Mera Aadhaar, Meri Pehchan”. In this article, we will be discussing all about Aadhar and related facts to it.

The Unique Identification Authority of India (UIDAI) is a statutory body that is established under the provisions of the Aadhaar (Targeted Delivery of Financial and Other Subsidies, Benefits and Services) Act, 2016 (“Aadhaar Act 2016”) on 12 July 2016 by the Government of India, under the Ministry of Electronics and Information Technology (MeitY).

UIDAI was earlier functioning as an attached office of the then Planning Commission prior to its establishment as a statutory authority. The Government then revised the allocation of Business Rules to attach the UIDAI to the Department of Electronics & Information Technology ( DeitY) on 12 September 2015, of the then Ministry of Communications and Information Technology.

The Government established UIDAI with the objective to issue Unique Identification numbers (UID), named as “Aadhaar”, to all residents of India that is-

(a) Aadhar will be robust enough to eliminate duplicate and fake identities, and

(b) Aadhar can be verified and authenticated in an easy, cost-effective way.

With this objective, the first UID number was issued on 29th September 2010 to a resident of Nandurbar, Maharashtra. So far 121 crore Aadhar number has been issues so far  to the residents of India.

The HQ of UIDAI is in  New Delhi and there are eight Regional Offices (ROs) across the country. There are two Data Centres, one at Hebbal (Bengaluru), Karnataka and another at Manesar (Gurugram), Haryana

Given below are some of the features of Aadhar: