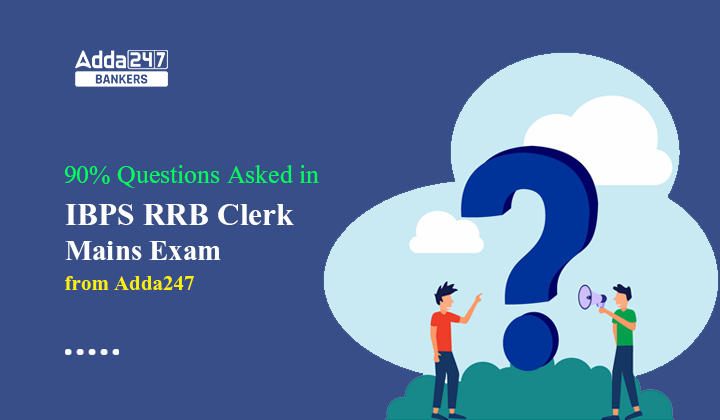 In this article we will be discussing the questions asked in the RRB Clerk exam in detail which will include their answer, from which month it is asked, and where it was covered on Adda247. Remember as the paper was online, So questions are memory based. It may vary in exact wording.

From the detailed analysis, we can understand that the questions were asked mainly from April, May months and even from January. The exam was on 24 September 2022. This shows the dynamic nature of General Awareness section. Every year, examiner asks from different months. So it is very important that you study general awareness on daily basis. Students needs to understand that general awareness requires consistency because when you read on daily basis, there are many current affairs which repeat. In this way you will be learning and revising the current affairs on the same time. There was 20+ questions which came from the study material given to students specifically dedicated for the IBPS RRB Clerk and PO exams. There are many questions which were very similar which were given the quiz PDF. It is important that you read and test your accuracy through quizzes.

Important note for the candidates who are appearing for the upcoming mains exams: Please read the power capsule and Hindu review monthly pdf and test your knowledge with general awareness question. It will be very efficient if you download the Adda247 app, which will keep your preparation up to date.

1. How many digits are there in ABHA ID?

Why was in news : ABHA was revamped by the government in May month.

This question was discussed in general awareness quiz: Question 191 from May month.

2. Who is the present Foreign Secretary of India?

This question was discussed in general awareness quiz question 242 May month.

3. Which country is not included in Quad?

Pakistan was one of the option.

4. A question related to WHO has awarded Global Heath Leaders award to ASHA workers of India was asked .

This current affair was covered on page 62 of part 1 of the GA Power capsule.

5. A question related to AVSAR scheme :

This scheme was covered on page 35 of capsule part 1

This question was discussed in general awareness quiz: Question 92 from August month

This was covered on page no :60 of capsule part 1. Same question was asked in the general awareness quiz of may month

7. Under which ministry PMGEP comes?

This was discussed on page 37 of capsule part 1

This scheme was in detail coved on the website: PM’s Employment Generation Programme

8. To whom Royal Architecture Award is given to?

This was given on page 62 of capsule part 1.

This was given on page 65 of part 1 capsule page 8 prt2. It was also discussed in weekly one liners.

This was given on page 63 of capsule part 1.

This was given on page 61 of capsule part 1. This question was also discussed in general awareness quiz question no 206 may month

This scheme was discussed on page 37 of capsule part 1. And in question no 124 of June month.

14. Till which age care should be provided under article  45?

Ans: 6 years, After 2010 amendment, the article was changed so don’t be confused with 14 years.

15. Who is  the Prime Minister of Pakistan?

This was given in the April hindu review on page 17

16. Who is the CEO of Apple company founder:

This was on page number 6 of capsule part 1.

or the question can Who is the cofounder of the Apple company?

Steve Wozniak may be was one of the option.

18. What is the meaning of Money Laundering?

This a static question. It was covered in detailed article of enforcement directorate.

19. Which team did India defeat in Thomas cup?

This question was discussed in general awareness quiz question no 115 in May month. As well as in may hindu review.

20. Who is the present Foreign Secretary of India?

This was discussed in may quiz pdf on question no 242.

It is a static question but this scheme was in news in April.

22. Which of the scheme is related to girl child development?

There were 5 options and one was Sukanya Samridhi scheme

This was a static question. This scheme was in detail.

23. Mahatma Gandhi setu is located in which state

This was discussed in may hindu review.

24. Who is the chief economic advisor?

He was appointed in January month  Hindu Review PDF.

25. Which of the following Yojana is for senior citizens?

As options are not know, can’t answer this.

This Volcano erupted January. It was covered in January Hindu review

This question was covered under this article: Health Statistics of India

Which statement is correct : 35 years should be minimum age, candidate must qualify to be as a loksabha member.

This question was shared in the detailed article on bankersadda : Presidential Election

29. Which of the following is not include Commercial Bank?

There were 5 option which are unknown.

This is a static awareness question.

This was covered in daily GK update of May and June month.

This festival was celebrated in January. It was discussed in hindu review of January.

It is static awareness question.

33. There was question on RBI Payment vision.

There was a detailed article in Target30+ on RBI Payment vision

It was given in the daily update of 2 June.

This question was in news because Barak Obama got emmy award recently in September.

This is discussed in September Daily GK Update.

It’s a static awareness question. It was not given.

38. When is the National Unity day?

39. Who is the Indian envoy of Ukraine: