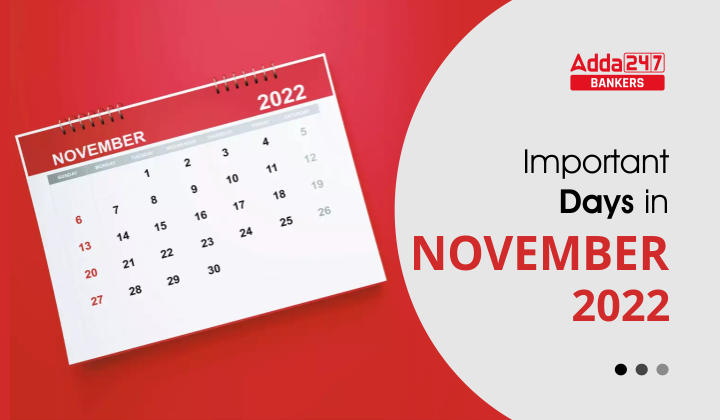 Various national and international organizations have designated several Important Days in November. There are festivals, holidays, and events to be aware of during the month of November. There are days set aside to commemorate important historical events or to raise public awareness of a particular issue. The complete list of significant November dates can be found here.

The UK Vegan Society’s 50th anniversary is recognized on this day. To raise awareness of veganism and its value in a world that is heavily reliant on meat and dairy products, World Vegan Day was first observed on November 1st, 2021.

On 1st November of every year, All Saints, Day is celebrated for the purpose of praising all the saints’. It is considered to be an opportunity for the believers to remember all of the saints and martyrs, known ad unknown, throughout Christian history. All Saints’ Day is known as All Hallows’ Day or Hallowmas.

The first Tuesday of November (1st November of this year) is observed as Melbourne Cup Day. This day is also known for one of the most famous horse races in different parts of the globe.

2nd November is observed as All Souls’ Day for the purpose of honoring the dead souls. During Roman Catholicism, 2nd November commemorates all those souls who are faithfully departed and are believed to be in purgatory because they died with the guilt of lesser sins on their souls. Through prayer, intercessions, alms and visits to cemeteries, people commemorate the poor souls in purgatory and gain them indulgences.

On 5th November, World Tsunami Day is observed and this is to highlight the dangers of tsunami and to focus on the importance of early warning systems to minimize the damage caused due to natural hazards. Traditional Knowledge about Tsunamis are provided by many organizations to make people aware of the situation.

Bhupen Hazarika Died on 5th November 2011 in Mumbai. This day is observed to remember a great poet, music composer, singer, actor, journalist, author, and filmmaker. He was born on 8th September 1926.

On 5th November 2001, the UN General Assembly declared that on 6th November every year the ‘International Day for Preventing the Exploitation of the Environment in War and Armed Conflict’ will be observed.

India observes National Cancer Awareness Day on November 7 every year to increase awareness of the terrible disease. The day was established in September 2014 by Dr. Harsh Vardhan, the Union Minister of Health. It is the birthday anniversary of Nobel laureate Marie Curie, whose study of radioactivity led to the identification of a treatment for cancer.

To commemorate the birth anniversary of India’s first Education Minister Maulana Abul Kalam Azad, National Education Day is celebrated. He laid the foundation of education in India and is remembered for his enormous contributions. He was the youngest person to serve as the President of the Indian National Congress.

12th November is observed as World Pneumonia Day which is to raise awareness about Pneumonia and its prevention. This is considered to be the world’s leading infectious disease and the much impacted age group are children below 5 years of age.

Jawaharlal Nehru was the first Prime Minister of Independent India and he was born on 14th November 1889 in Allahabad, Uttar Pradesh. Children’s Day is celebrated in India to remember this auspicious day of Jawaharlal Nehru’s birthday.

The future leaders who will lay the foundation for civilization are honored on Children’s Day. On November 14, India observes it in honor of Pandit Jawaharlal Nehru, also referred to as Chacha Nehru. Many inspiring and educational events are planned across the nation to advance children’s rights and education. The world celebrates Children’s Day on November 20. On this day in 1948, the United Nations adopted the Declaration of Children’s Rights. General Assembly of 1959.

On every 14th November, the World Diabetes Day is observed. The main focus of this day is to raise awareness about the impact of diabetes disease, its prevention, and education on diabetes among people.

Jharkhand was established on 15th November 2000. This establishment was done by the Bihar Reorganization Act as 28th State of India.

International Students Day was established on 17th November 1939 by the Nazi troops. 9 students leaders and the bravery displayed by the students during this incident was exceptional on this day.

National Epilepsy Day is observed on 17 November. On this the main focus is to make people aware about the epilepsy disease, its symptoms, and prevention. Epilepsy is considered to be a chronic disorder of the brain which is symbolized by recurrent ‘seizures’ or ‘fits’. It is seen that this can also impact people of any age group and different person gets different set of concerns and problems to deal with.

17th November is observed as the day of World Chronic Obstructive Pulmonary Disease Day or World COPD Day every year. Theme of this year is “Healthy Lungs – Never More Important”.

On November 19, the world recognizes and honors men for their accomplishments and contributions to society by celebrating International Men’s Day. It is not intended to compete with Women’s Day but rather to bring attention to issues that men face throughout the world.

On 20th November every year, Africa Industrialization Day is celebrated to raise worldwide about the problems and challenges of industrialization in Africa. It is also observed that the governments and other organizations in various African Countries focuses on examining different ways to stimulate the industrialization process of Africa.

World Television Day is celebrated on 21st November every year. On this day the daily role of Television is highlighted as it presents different issues that affect people according to the UN. People celebrates this day as the acceptance of the impact and reach of geo-televisual communication on the world scenario.

21st November is observed as World Day of Remembrance for Road Traffic Victims every year. This day highlights the number of annual road traffic deaths has increased. There has been increase in road traffic injuries and now there are some leading killer of the people who are aged between 5 years to 29 years.

International Day for the Elimination of Violence against Women is observed on 25th November every year. This day was established by UN General Assembly during the year of 1993. This day defines the violence against women as an act of gender-based violence that results in physical, sexual, or psychological harm or suffering to women, including threats, etc

On 30th November of every year, Saint Andrew’s Day is celebrated in  Scotland and especially in the countries where Saint Andrew is the patron saint like Barbados, Bulgaria, Columbia, Cyprus, Greece, Romania, Russia, Scotland, and Ukraine. This day is the feast day of Andrew the Apostle. This is one of the important dates in Scottish calendar after Burns Night and Hogmanay, signalling the beginning of Scotland’s Winter Festival each year.

In the table given below, candidates can check all important days and dates month-wise.