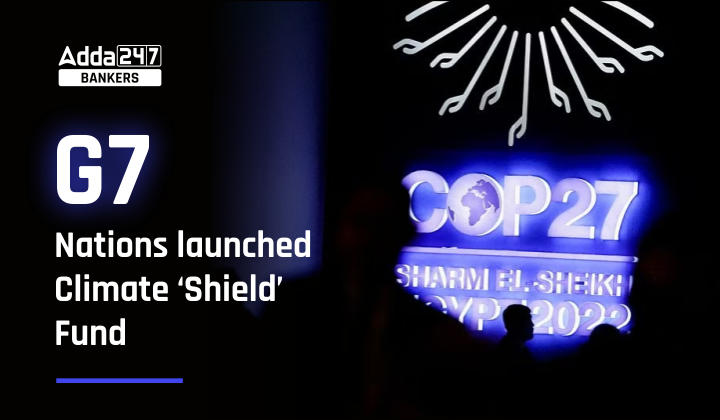 G7 nations launched climate ‘Shield’ fund: A strategy was planned by G7 Nations to provide funds to the countries that are suffering from various climate disasters. It was decided at the U.N. COP27 summit on Monday and the name “Global Shield” was entitled to it. Many are raising questions about the proposed scheme and talking about its effectiveness.

Here, we have provided the highlights of the news G7 Nations launched climate shield fund:

What is Climate Shield Fund?

Climate Shield is the fund that will be given to countries after any disaster such as flood, drought, hurricane, etc. hit the nation. Through this pre-arranged insurance and disaster protection funding will be provided to the affected nations by the G7 Countries. Global Shield will act as a complement for any loss or damage.

G7 is an intergovernmental organization that was established in 1975 after the oil prices increased by OPEC countries. G7 includes a group of 7 economically developed countries which are mentioned below:

COP 27 is the is the 27th United Nations Climate Change Conference or the Conference of the Parties of the UNFCCC is being held from 6th November 2022 till 18th November 2022. The event is being organized in Sharm El Sheikh, Egypt. Since the first UN Climate Agreement in 1992 the summit is being conducted annually. For the year 2022 the summit is being presided by Egyptian Minister of Foreign Affairs Sameh Shoukry and the heads of more than 90 states, 35,000 representatives of 190 countries are estimated to attend the meeting.